Providing Perspective: The Jaguars' Coach, the Big Lazy, and the UDFA's

Share All sharing options for: Providing Perspective: The Jaguars' Coach, the Big Lazy, and the UDFA's 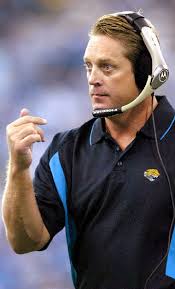 "Get your ass on the practice field!!"

It is a beautiful, relaxing summer afternoon in Florida. Not a cloud in the sky down here; it's the kind of day where you can't help but smile. I figured I'd post some thoughts I've had on the amazing UDFA's, and clarify my position on Jack Del Rio, which it seems became somewhat misconstrued.

The last article I posted put some hypothetical heat on Del Rio; it was just an attempt to provide some perspective. Long-time readers know I love Del RIo and his style of aggressive smash-mouth football. I love the fact he goes for it on fourth and short so often. The statistics don't lie, it's a gutsy call, but it is often better to go for it. Del Rio got soft last year, and he realized it mid-season, when he took out veteran linebacker, and longtime defensive leader, Mike Peterson.

I love del Rio, I support him getting another year if the team improves to at least 8-8 this year. He's a proven coach, a good leader, and an excellent defensive mind. That being said, I would also agree with the potential validity of any argument that stated he constantly lets others take the fall, and that his striking personality leaves little room for compromise with anyone, coach or player. The facts don't lie, and I don't mind them. I certainly don't blame the departure of Ray Hamilton or Mike Smith on Jack, but his clashes have resulted in the departure of some. The clash with John Henderson, is an example of sound coaching, but he's a little late to the party. He should've never allowed Henderson to miss so many practices without injury.

Del Rio is obviously a man who values loyalty very highly and his continued presence on the sideline is an asset, not a liability, to the organization. I expect him to succeed this season and continue forward as the Jaguars coach through at least one more contract extension.

John Henderson has claimed he's "in". I'll believe it when I see it on the field, that's all I can say. Perhaps I'm jaded from two lackluster seasons marred by unexplained absences from practice, and underachievement on the field. Perhaps I'm disappointed that a guy who makes 5 plus million a year is already repeating the behaviors from his last two years, and it's only OTAs. Perhaps I'm of the opinion that someone making as much as John should be producing more then he has.

Either way, I've been a supporter of trading John for awhile, and I think that may be in his future, but not this season. Without John, our defensive line will be gutted each week. We need The Big Lazy, and if he really gets on board, he'll be kept. He could become an excellent mentor to Kinghton, but he has to get with the program. Saying it is one thing, doing it is something completely different.

So, I've gotten over my excitement with Abdallah, the former Jaguar who wasn't present at OTAs. I still like his potential, and he may make it on the practice squad of the Jags or another team. As you've see, I've done numerous pieces on the Jags UDFA class, and there is definitely potential for more than one of these young men to make the final 53. Here's a recap of Big Cat Country's write-ups for our undrafted gems.

In order for any of these players to make the squad, they'll have to contribute on special teams. The Jags released Chad Nkang, and that means there's room for someone to steal his spot as a major special teams tackler. Russ Purnell will have the players, he better follow it with production.