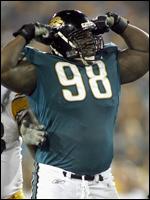 Will the real John Henderson please stand up

The defensive tackle spot has gone from being the epicenter of the team to perhaps its weakest link. John Henderson had not performed well the past two seasons, Rob Meier flopped when handed the starting job, and a lack of depth all contributed to problems in 2008. This off season has been an eventful one for the unit, most notably because of Henderson and Coach Del Rio's high profile war of words earlier in OTAs. In addition, the Jaguars drafted Terrance Knighton in the 3rd round. What will it take for the Jaguars defensive interior to once again become dominate?

I'm sure anyone reading this knows the details already, so I'll just move to the meat of the issue. Henderson has to show he still has some fire left in him this season. His name was linked to multiple trade rumors and if any of the younger DTs step up this season, he will be on his way out this season. Even performing at a level somewhere between 2006 and the last two years would make him one of the better DTs in the NFL.

Now, can that happen? I'm leaning towards no. Henderson is getting on the back end of his career and to expect him to revitalize himself to that level might be asking too much. Perhaps Henderson's biggest value left is as trade bait.

While Marcus Stroud and John Henderson started during the Jaguars' defensive glory days, Rob Meier was there as the reliable back up. Fans and coaches said he could've started on any other team that ran a 4-3 scheme. Then he was handed a sizable contract extension and the starting job. Meier's 2008 campaign was bad, enough said.

Meier may need to once again simply become "The best backup" to be effective again. It was painfully obvious Meier couldn't handle a starting job. However, can the talent behind Meier rise up to replace him?

Landri is at the stage of his career he needs to "Come off the shelf." Landri has shown flashes in his two years on the roster, and the Jaguars need him more than ever. Landri has shown he can get after the passer in a reserve role, however, is he the same kind of fool's Gold that Meier turned out to be?

Knighton was taken in the 3rd round out of Temple. Many draftniks felt Knighton was a reach, though the Jaguars claimed he was "the last DT with starting potential available." Knighton brings a good deal of raw potential to the defensive line, with the key word being raw. Unless Knighton vastly improves technique during camp, I expect him to be a backup for this season.

State of The Position

I know there are other DTs on the roster, but at this point, these are the four players who will be seeing the most playing time. The Jaguars have two aging, and rapidly declining, players in Henderson and Meier. Landri and Knighton represent the future of the position, and must begin to make their moves this season. Landri has the highest expectations this year. He has to stop being a "jar on the shelf" and become either the "third starter" or even replace Meier if the Jaguars want to be successful in the interior.