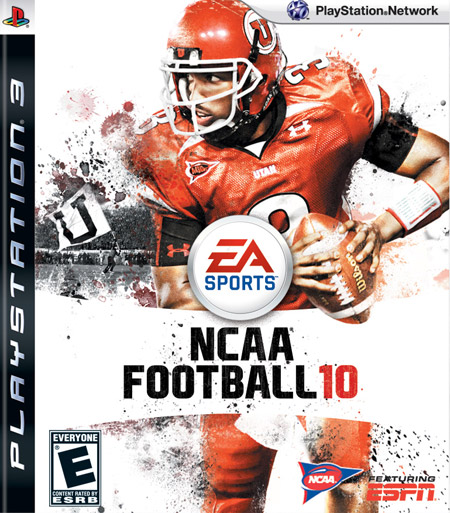 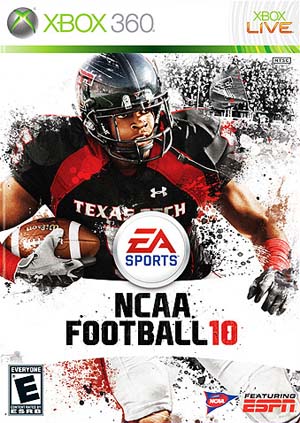 Another year, another round of EA football sims. First up is the NCAA Football franchise. While the series is often compared to it's older and more popular brother Madden, NCAA isn't simply a reskinned prequel. NCAA 09 laid solid groundwork for the series on the PS3 and 360 with great visuals, fun gameplay, and the long requested Online Dynasty. NCAA Football 10 takes those advancements and achieves mixed results. However, this game is still the best iteration of the series on either the PS3 or 360. 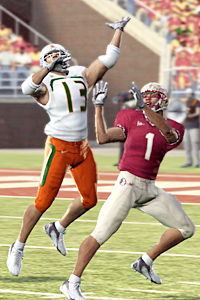 NCAA has always had a higher margin for error than Madden and NCAA 10 is no different. Options, reverses, half back passes, and other trick plays are served in bunches. However, the core gameplay has seen the biggest adjustments this year.

The biggest difference I noticed is the Setup meter. Run the ball with success consistently, and you'll when you go to a play action pass, it will say something like "9% setup" or "87% setup" depending on how you are doing. The higher it is setup, the better chance of success (ie, with the play action, either the safety or corner biting and leaving the receiver open.) However, the fact there is no setup function for the defense leaves me scratching my head.

Pocket presence has also been a major "Buzz word" for EA this year. One of the new pre-snap functions allows you to shift your lineman left, right, be aggressive, or sit back. In practice, this means they'll hold on about every play and give you ridiculous amounts of time against all but a few D-lines.

In Dynasty mode, my prayers have been answered with the recruiting tool. My biggest gripe had been that you spend as much time in menus recruiting during the season as actually playing football games. Now, the sim feature has been retooled. It will actually stick with the players you target to start the season, instead of abandoning a 5 star running back to go after the 2 star free safety because it thought you needed a safety more.

You can also lock in and play any play from the perspective of a single player. It can be interesting at first, but I didn't find it that appealing.

Sadly, glitches do rear their ugly head. The worst offender of this was if a shotgun snap went over my head, go 30 yards down field, and be called an incomplete pass. I've been playing this nearly nonstop since I got the game at midnight on the 13th and this error has happened around a dozen times. The glitches aren't game breaking, but be prepared to have your hopes dashed by one at least once. 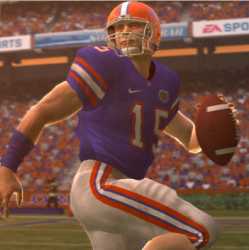 Last year, I noted how NCAA 09 was the first in the series that looked like it belonged on the PS3 and 360. It seems EA seemed fine with that, as the graphics have seen minimal improvements. The animations are hit or miss and the player models look identical to NCAA 09's.

The biggest reason anyone usually buys a new edition of a sports franchise is the new features. NCAA 10 is no different. The three big new features this year are Road to Glory, the robust team customization, and Season Showdown.

Road to Glory is simply Campus Legend mode with Erin Andrews narrating and providing eye candy. However, by the sheer fact I mentioned Erin Andrews, it's a huge improvement.

The other two features, however, need to be included in every EA Sports games in some capacity from now on.

EA took the team customization from the console to the PC, and made it perhaps the deepest customization system this side of RPGs. Getting your custom teams onto your PS3 or 360 is easy enough, though you have to pay to have more than 12 teams.

Season Showdown is easily the most interesting feature though. You pick a Season Showdown team at the start of the game. Say you're a big Florida State fan. FSU is your online dynasty team, your player in Road to Glory goes to FSU, etc. At the end of every game, all the points you accumulate will be sent to a central server and be added to FSU's grand point total. It provides an extra bit of rivalry and just another reason to play the game.

If you've read this far, you probably want to know if I think this game is worth the $60. If you like college football, you already know the answer to that and I've probably already played against you online. If you don't, NCAA football 10 isn't the masterpiece NHL 09 is.

The game looks identical to NCAA 09, though it still looks good.

Erin Andrews narrates Road to Glory mode, and the presentation is slick through out.

Bug and glitches bring down an otherwise solid system.

Dynasty, Road to Glory, Season Showdown, online, and everything else should keep you busy until NCAA 2011.

A solid game that let a few issues take it down from being a true classic.