How the NFL Owners see the NFL right now

Share All sharing options for: How the NFL Owners see the NFL right now

This chart is at the heart of the NFL Owners negotiations between themselves on how to run the league and what stance they will take with the Players Union in the just begun new Collective Bargaining Agreement talks.  Let me take a minute and clear this with you. 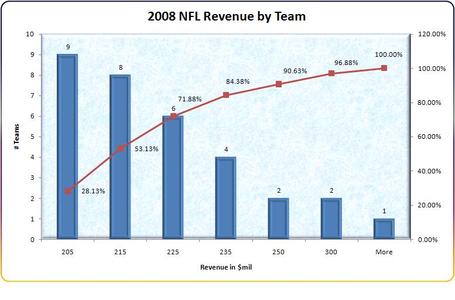 First, this is a histogram chart.  The first bar says 205 and represents $205  million in revenue for 2008.  It extends on the Y-axis to 9 meaning 9 teams in the NFL had 2008 revenue that was less than or equal to $205 million.  For example the Minnesota Vikings had $195 million in revenue. They are in the nine since they made less than $205 million.  The percentage is a cumulative percentage number and says 9 teams represent 28% of all teams.

Now that we understand the chart, we understand the issue.  With about 50% of the teams making less than $215 million and 50% making more, we see the division of the haves and have-nots.  All NFL Labor contracts are based on average revenue, the salary cap is a percentage of the average.  Well one team, the Washington Redskins, brings in $327 million, and 5 teams bring in more than $235 milion, the average doesn't represent most teams. The average revenue is $222million, yet 71% of the teams make $225 million or less.  The costs of labor is by contract, spread evenly, but the revenue isn't.

Here is what is at risk; the competitive balance of the NFL; the ability of all NFL teams to stay solvent; the ability of NFL owners to sell their teams and reap the equity increase.  In short, the exact way the league was built into the revenue monster it is, now is at risk.

So how do the NFL Owners see the issues?  The have-not owners want complete revenue sharing.  Stadium naming rights are shared 32 ways, sponsorships for individual teams are shared among all teams. The Have owners argue they paid a premium for their teams and need a way to generate free cash to justify the higher team cost. They do not want to share individual revenue.

The labor agreement is based on all revenue including naming rights and sponsorships. Costs are shared equally. This has to be adjusted for the have-nots to survive. The average revenue is being skewed high by the top teams. Recasting revenue at the median rather than average would be a start, but not the final answer. Costs can't follow the highest teams ability to pay but rather everyones ability to pay. The salary cap isn't working properly in this revenue environment.

Top ten rookie salaries are taking a disproportionate share of player costs.  A poor NFL team isn't always helped by a top 10 draft choice, but rather hampered by it.  Paying off two or three busted top draft selections hurts teams paying out 70% plus of revenue in salaries. Detroit has lost money in each of the last two years.  How much will a Matt Stafford bust hurt?

Right now discussions are happening concerning the economic model of the new NFL.  What will revenue sharing look like? What will the salary cap look like? What will rookie salaries look like? I don't know where they are going, but stay tuned to Big Cat Country and I will report on it as I learn. You all just go to the games and enjoy, the stories will be here when you get back.  Have fun, the Jaguars are counting on you.