Share All sharing options for: Jack Del Rio On Trial 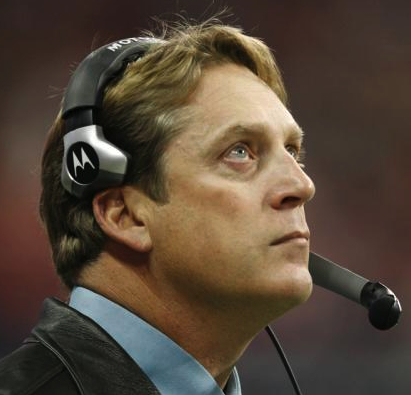 Ladies and Gentlemen, we are here to decide the future of the Jack Del Rio, and by association, the Jacksonville Jaguars. Coach Del Rio was hired following the 2002 season to replace Tom Coughlin as head coach. Tasked with helping drag the Jaguars out of salary cap hell and return to a championship contender, he has lead the Jaguars to the playoffs twice and helped mold one of the most physically dominant teams in the NFL. However, he has also managed to gain his share of detractors. They accuse him of leaving his teams ill-prepared and will never lead the Jaguars to the promised land.

The charge brought against him is that he is not the man for the job, and the Jaguars should terminate him as their head coach. You will listen to both sides present their case and decide at the end whether Del Rio should continue as the Jaguar's head coach.

Members of the jury, what we have here is a textbook case of a coach who has simply run his course. Jack Del Rio has been the head coach of the Jaguars for six years. In that time, he has been given ample opportunity to turn the Jaguars around and make them a playoff fixture. Instead, with the exception of 2007, the Jaguars have been the most common team associated with the phrase "Yeah, but." After I am finished, I'm sure you'll agree that with Coach Del Rio, the Jaguars will never be more than "Yeah, but."

There are numerous examples I could use from the 2004 season. I could use the 20-6 loss @Houston a week after winning in Indianapolis and having a chance to take a commanding lead in the division. I could use the 3 game losing streak after starting 6-3 that made this game so critical to the Jaguars playoff chances in the first place. However, I will just stick with the game that many Jaguars fans remember to this day.

We all know the story; the Jaguars were coming home after beating the Packers in Green Bay. With 2 "cupcake" games remaining against Houston and Oakland, the Jaguars seem destined for a return trip to the playoffs. Instead, the team laid a massive egg in front of the small home crowd and were shut out of the playoffs.

Over a three week period, the Jaguars went from one of their highest highs (a 44-17 slaughter of Indy) to a Week 17 loss that made fans seriously consider if Quinn Gray was starting material. Any time Pacman Jones is mentioned on ESPN, his interception for a touchdown in Week 15 is still shown. The Jaguars gave a noble fight against New England, however, as par for the course, the Jaguars faltered against the top shelf. The loss to the Chiefs simply showed a team that had given up, and seemingly didn't care.

This has been covered so often, I doubt anyone here needs a refresher.

I believe we could all agree the four teams that are at the top of the AFC's hierarchy are Pittsburgh, New England, Indianapolis, and San Diego. What is Jack Del Rio's record against those four teams as head coach?

Del Rio has a Career winning percentage of .400 against the Cream of the AFC Crop. If I take away the Steelers and only factor the Chargers, Colts, and Patriots it plummets to

I could go further about all of the rumors about Del Rio's personality rubbing players and coaches the wrong way. Or his history that makes me questions his maturity, but I will simply deal with the facts.

Jack Del Rio took over a team that was, in many respects, an expansion team. He deserves credit where credit is due. However, that is no excuse for how this team has performed consistently. The Jaguars organization and fan base has had six seasons to evaluate what kind of coach he is.

What have we seen? We have seen a team that constantly folds under pressure, packs their bags when things get down, and seemingly can't compete with the best this conference has to offer.

Ladies and Gentlemen of the jury, I say to you that Jack Del Rio is not the man for the job. He has shown that while he may get the Jaguars within sight of the mountain top, we will simply falter back down. The Jaguars will simply not be a legit contender as long as he walks the sidelines.

Jury members, you have heard how Coach Del Rio is simply not the man for the job. I admit, the Jaguars have stumbled along the way, but that is to be expected with a young coach. A year ago, we were praising him for ushering in the Jaguars 2nd Golden Age and once again allowing fans to utter the words "Super Bowl" with legitimacy. He was handed a team that may have had less talent than the 1995 expansion team and turned it into a playoff team in three seasons.

To counter my opponents positions, I saw a young team take it's lumps against the Texans. A valiant defensive performance was foiled by an early indicator of Bryon Leftwich's inability to win critical games. In 2006, Garrard had a meltdown of epic proportions against Tennessee and continued through the final two games of the regular season. In 2008, injuries, multiple free agent and first round busts, and hubris throughout the organization created a perfect storm. While Del Rio's record may not be the best against the elite, have the Jaguars had the kind of talent those teams had?

Heading into Week 10 of the 2003 season, Jacksonville was 1-7 and looked to have the #1 pick in the draft. Jack Del Rio's team trailed at halftime to the heavily favored Colts. That young team could have folded then and there, instead, they mounted a comeback and played above their ability. They finished 4-4 in their final eight games.

Would a coach who let's his team fail pull that off? Coach Del Rio motivated his team to keep fighting when all that was on the line was pride. It was perhaps the Jaguars' darkest hour, and he came through.

2007 Wild Card Round @Pittsburgh
The Jaguars had surrendered a lead late in the 4th quarter in one of the most hostile stadiums in the league. Instead of folding, Jacksonville went on a career defining drive for all involved. David Garrard made the most miraculous play since Brunell was running through Broncos defenders in the 96 divisional round, and the Jaguars came out victorious.

Byron Leftwich, Reggie Williams, Matt Jones, Hugh Douglas, Jerry Porter, Drayton Florence, all names that were brought in to be bedrocks for the organization. Instead, they represented wasted roster spots and cap space. The fact that the Jaguars had to jettison their franchise quarterback, yet still were a playoff contender is a testament to Del Rio's coaching ability. How many other franchises fielded contending teams during bitter quarterback controversies, or managed to recover from a failure of a franchise quarterback?

Is Jack Del Rio the greatest coach in the NFL? Probably not. However, is he a good coach who can take the Jaguars to the top? Absolutely. Coach Del Rio has done the best he can with what he has been given. It is foolhardy to think any coach could dramatically improve how this team has done over the years.

It is up to you, the members of the jury, to decide whether Coach Del Rio is guilty or not. Please vote and leave a comment as to how you feel