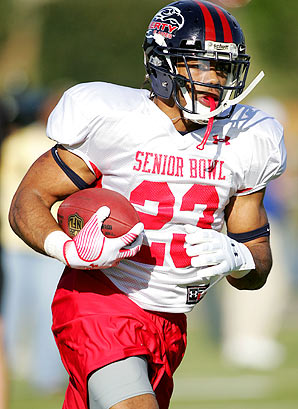 Rashad Jennings: Under Contract and Ready for Camp!

Running Back Rashad Jennings, who Vic Ketchman says "had the best spring" of any offensive player on the team, is now under contract and ready to go with training camp just around the corner.  Jennings, according to Michael Wright of the Florida Times Union, signed a 1.78 million dollar contract with a $38,000 signing bonus.  The 7th Round Draft pick out of Liberty lit things up during OTA's and Minicamp, but will now have to prove that he can turn flashes of briliance in shorts and a t-shirt into something real on the field.

I'm starting to wonder how our first round pick, Tackle Eugene Monroe, is doing in his contract talks.  As usual, the New York Jets screwed everyone over with their absurd contract for Matt Sanchez, though hopefully because it was a quarterback signing, it won't spike the contracts for everyone else behind him. Darrius Heyward-Bey and B.J. Raji bracket Monroe, so if we see one of those sign in the next few days, we can get an idea of what Monroe will get.  Last year I assumed that we'd just add 8-10% to what the previous player at the 7 spot receieved, though Derrick Harvey ended up holding out and set his rookie season back.

I'd go out on a limb and say that Monroe will be in camp on the first day, but after going on the record and saying "there is no way that Harvey misses a minute of camp" on JagNation radio, I learned that these things are a bit more complicated than anything a blanket statement can cover.

Anyone want to take a guess as to what Monroe's contract will look like?