Camp Battle 2009: Quarterbacks (and a comment on Michael Vick)

It wouldn't be the post-Mark Brunell Jaguars if questions about the quarterback position weren't being asked heading into training camp. The 2009 Jaguars have to answer them in bunches this year. Is David Garrard a one hit wonder? Can Todd Bouman be asked to do more than hand off to MJD in the event Garrard gets hurt? Will either Paul Smith or Todd Boeckman be more than practice squad caliber? Should the Jaguars bring in Michael Vick?

All of these questions need to be answered at some point, and their answers may well have the biggest impact on the Jaguars not only this season, but down the line as well. 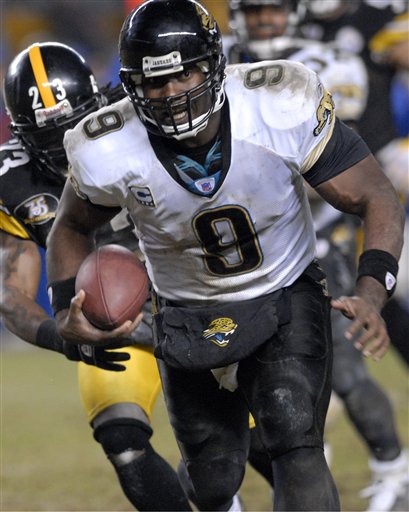 Were David Garrard's 4th down heroics in Pittsburgh simply the final note of his one hit wonder season?

I'll spare recapping 2007 and 2008; what we want to know is can Garrard lead this team back to the playoffs. The common complaint about Garrard was that he regressed in 2008 compared to 2007. What do the numbers say?

While Garrard's completions and yards went up, his QB rating took a huge hit. This can be explained because of the Jaguars lack of a running threat compared to last year. Garrard had to be a one man show in 2008, and he did an admirable job considering the receivers he was throwing to.In addition, Garrard was the most hit QB in the league last year. A product of the Jaguars O-line and having to throw constantly from behind, that is never a good indicator. Overall though, I don't think Garrard's 2008 was as bad as others are making it out to be.

Heading into 2009, Garrard has to have a career year for all of the right reasons. Early reports are the Garrard is already making Torry Holt is "Go to" guy for 2009. If he can get in a groove with Holt and get some protection, he'll have a good year regardless.

Bouman should have been the Jaguars back up quarterback last year. However, thanks to a Shack Harris special, he was cut in favor of high priced Cleo Lemon. What does Bouman bring to the table? Not much on paper. Bouman only has six starts in his career and hasn't done anything to instill any confidence he can be effective for a 2-3 game stretch. If nothing else, Bouman represents a known commodity that will entrench him at the #2 quarterback.

An Ohio State product who lost his starting job to mega-recruit Terrell Pryor, Boeckman wasn't much more than a "Game Manager" at the college level. He'll provide another arm in camp and probably not much more. He'll be competiting with Paul Smith for a practice squad spot.

A BCC favorite, Smith spent almost the entire season on the Jaguars practice squad. Smith was activated for the final game against Baltimore. Smith's knowledge of the system, and frankly, better skills than Boeckman should get him another round on the practice squad, if not a chance to get on the active roster.

The question of Michael Vick

When Michael Vick was reinstated by Commissioner Roger Goodell, the can of worms that opened on the possible teams that Vick would end up playing for. The Jaguars, despite the record of Clean Gene, have been mentioned as a likely landing spot.

As it's illegal to mention Michael Vick and not say something as to his crime, here is my position. He committed a heinous act and murdered living beings for nothing better than blood sport. That being said, I believe Vick has served his punishment and is now due for a chance at redemption.

Should the Jaguars try to sign Vick? He would bring the Jaguars immense publicity, both good and bad. However, he has had issues prior to the dog fighting charges, such as flipping off the fans following the game. It seems his time in jail has humbled Vick, and I'm sure he'll be hungry to prove he's worth more than the slightly more than minimum deal he will sign.

Do I think the Jaguars will sign him? No. Would I welcome and support the Jaguars signing Vick? Absolutely.

The State of the Position

Let's hope David Garrard doesn't get hurt this season. If Garrard goes down, or proves that he was a one hit wonder, then the Jaguars hopes of a successful season go down with him. While Bouman showed he could come in to relieve Garrard for a short period, I'm not convinced he could come in and lead the Jaguars in a 3 game stretch like Quinn Gray did in 2007.

Boeckman and Smith will fight over the third QB spot, and hopefully in their competition, one can distinguish them self enough to be put on the 53 man roster. Either way, at a minimum, expect a good deal of attention to free agent or rookie quarterbacks by the Jaguars next off season.