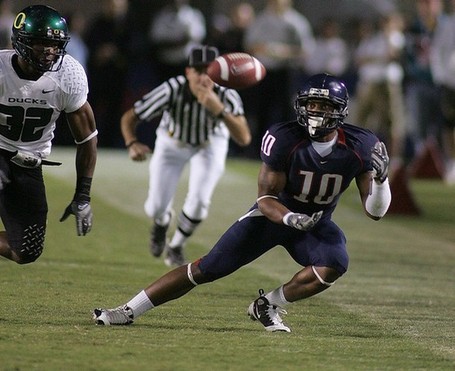 What would your definition of a Shack Harris wide receiver be? My definition would be tall, slow, poor route runner, and a knack for substance abuse. Since Jimmy Smith retired following the 2005 season, the Jaguars have been plagued at the position. Enter Mike Thomas, the antithesis of a Shack Harris receiver. Thomas is short and an excellent route runner with 4.3 speed. He is the PAC-10's All-Time leader in pass receptions. In addition, he started returning punts his senior year. He took to it well, returning two for touchdowns and was named 1st team All PAC-10 as a returner and wide receiver. What does Mike Thomas offer the Jaguars that made him such a great pick in the fourth round?

(Yeah, I know this video has been posted on this site a half dozen times)

Thomas has the kind of speed you want from a wide receiver, at least on paper. There are some questions as to whether he can with stand an entire NFL season with his frame. In addition, how well can he handle being pushed around by physical corners.

According to The Experts

He has better than average top-end speed and will be an excellent possession receiver out of the slot in the NFL. His quickness will allow him to separate against man coverage against most nickel and dime defensive backs in the NFL. He is a polished route runner and shows tremendous elusiveness after he catches the ball

Does not have the height that you look for...Will have lapses in concentration and drop some balls...Has trouble beating the jam...Isn't really a vertical threat...Minor character concerns ... Upside is limited.

May not be able to be more than a slot receiver

Why Is Mike Thomas a Jacksonville Jaguar

There is always going to be a spot on a NFL roster for a guy who can get open and has reliable hands. Mike Thomas fits both of those categories. In addition, he brings added value as a returner that will only boost his chances of making the roster. Thomas isn't quite as squeaky clean as some of the other 2009 picks have been, but I doubt we'll hear about him being found in the back seat with cocaine.

With the departure of Dennis Northcutt, Thomas seems primed to grab the #3 receiving spot. I would expect a battle between him and fifth rounder Jarrett Dillard for playing time in that role. Regardless, I believe Thomas will entrench himself as the Jaguars return man. He is too fast and too good with the ball in his hands to not make plays on special teams.