Share All sharing options for: The Minnesota Test Case 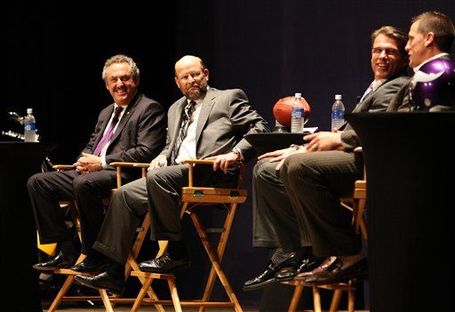 In a recent article, I had come to the conclusion that the threat of a team moving was a dying reality for NFL owners. Most every major metropolitan area that wanted a team had one except Los Angeles. In my hypothesis, the economic climate had so changed from the 1990's that public funding of stadiums was no longer possible, and only private funding was an option. In my delusion, any owner with no option to move and who subsequently loses their local support becomes at risk of losing their investment. Some NFL franchises could go at fire sale rates or even collapse under the continually rising player cost structure.

With that as a back drop, I am now watching the Minnesota Vikings drama play out and testing my theory. But first, a little background information.

The Minnesota Vikings have had ownership issues for most of the last 20 years. In 1998 the NFL advanced Red McCombs $100 million to help him buy the Vikings from a 10 member consortium that the NFL hated. Red McCombs bought the Vikings for $246 million. The consortium didn't have any member with holdings over 30% and thus the NFL couldn't deal with any one person in policy agreements.

In 2005, Red McCombs sells the Vikings for $600 million to Zigi Wilf and his brothers exiting at about the right time. Zigi Wilf believed that a new stadium was a done deal.

Minnesota and the Twin Cities, Milwaukee and Minneapolis, currently support four professional teams, football, baseball, basketball and hockey. The Twins baseball team is the favorite child with public funding for a new baseball stadium approved in 2006 for $392 million matched by $154 million from the Twins.

Since 1995, the NFL has been posturing that the Vikings will leave if a new stadium isn't approved. I believe in 2005 Red McCombs realized what I hypothesized, that relocation was no longer a possibility and got out while he could.

This brings me to the present situation and, to me, the most fascinating scenario about to play out. Minnesota is facing a $5 billion deficit. A request again by the Vikings to fund a $975 million stadium for them has once again gone unanswered. The Vikings frustration is growing. The lease at the Hubert H Humphrey Metrodome expires in 2011.

The following is a quote from the Vikings VP Lester Bagley as reported in the Star Tribune on February 12, 2009

Bagley said Vikings owner Zygi Wilf isn't currently looking to move the franchise, but he did not close the door on that happening. The top possibility for relocation is the Los Angeles suburb of Industry, Calif., where billionaire real estate developer Ed Roski Jr. hopes to build a privately financed $800 million stadium. Roski contacted the Vikings last summer, but Wilf declined to meet with him.
Bagley acknowledged Wednesday that Roski's group, which should have all approvals in place soon, has since "periodically" attempted contact with the Vikings through a third party.

And where does Mr. Bagley say the Vikings will go if not Los Angeles? Also from the same article.

"We have 30 games left at the Metrodome, and the issue isn't what the Wilfs will or won't do. It's that other NFL owners, other potential NFL markets and potential owners will come after this team. If you let the market work, it's not going to be a favorable outcome for the Twin Cities in terms of the long-term future for the club."

Not a lot of specifics in this threat. It sounds more like blustering to me.  I would be very careful about pushing this issue too hard. If you don't have a new home, best not to mess up the one you have.

So where do the Vikings take their problem? The Associated Press reported on March 24, 2009

The Vikings said their stadium situation has risen on the NFL's agenda.

Speaking at league meetings in California, commissioner Roger Goodell acknowledged economic challenges to the goal of a new downtown Minneapolis facility. But Goodell said Monday he's "hopeful" talks between team and state can yield progress toward a solution. The Metrodome lease expires after the 2011 season.

Goodell cited new Gophers and Twins stadiums as evidence of the Vikings' need for a new place to play. He said Gov. Tim Pawlenty "recognizes the importance of that."

The Vikings were updating other league owners on their situation Tuesday.

And what was the Governors response? The following was also written in the Star Tribune on February 12, 2009

Asked about Bagley's comments, McClung said: "Governor Pawlenty recognizes that the Minnesota Vikings bring a lot of enjoyment to a lot of people in our state. They are part of living in Minnesota. But the challenges we're facing, a nearly $5 billion state budget deficit ... so most of the activity at the Legislature is focused on balancing the budget and maintaining core government activities."

In short, Sorry Charlie, we got other "priorities" like police and fire protection and taking care of unisured children.

In other articles I read, but can't find right now, members of the Minnesota legislature have indicated that the Vikings leaving won't be the end of the world.

So here we have the situation. The NFL would like to stick together on forcing governments to pay for stadiums, but some owners are getting private funds to finance their stadiums. Financing stadiums with public funds is a tough sell right now. For arguments sake, let's say Los Angeles has a team and the Vikings have nowhere to go. What then? They can make money in Minnesota only if costs are in line with revenue. That means the Collective Bargaining Agreement is broken and teams can fund player salaries to the level they can support instead of to the minimum specified by the agreement. Not every market can afford a $150 million salary and benefits cost structure. The Vikings can't. The Collective Bargaining Agreement must be broken for smaller market teams to survive.

Let's say the Vikings do go to Los Angeles, will Minnesota bid on a new NFL team? I don't think so. That removes one city from the list of possible relocation sites. So where do the 49ers move to? Where do the St Louis Cardinals move to? Where does Jacksonville move to? I don't see anyone anywhere fighting for an NFL team.  California is broke, Orlando doesn't need a team, Columbus has the Buckeyes, San Antonio might take one if it was free.  Virginia Beach? Hartford Connecticutt? Someone call out a city big enough with an extra billion dollars laying around.

I think the smart money is on staying home and making friends with the fans instead of alienating them. A $600 million investment is a terrible thing to waste. If Wayne Weaver eventually sells, I don't see a better market than Jacksonville available.

I think the Minnesota Vikings situation will be interesting to watch. I think it will tell us a lot about the state of the NFL for the next five years. I really believe the lowest 10 revenue generating NFL franchises are looking to hang on right now.  There is nothing that says the NFL franchise value can't go the way of the housing market. That is the real threat to some of these teams. I see a labor fight on the horizon.