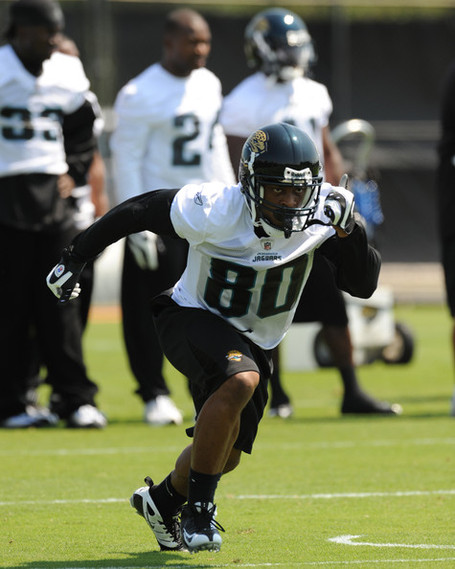 Mike Thomas #80 of the Jacksonville Jaguars during mini-camp.

The youth movement was amplified with the trade of Dennis Northcutt, and today, the Jaguars signed a piece of that movement. Jacksonville.com is reporting that Mike Thomas, 4th round WR pick from the University of Arizona, has signed a deal with the Jaguars. Signing details are here. This appears to indicate that through OTAs the coaching staff was satisfied that Thomas' youth was sufficient to allow for the trade of Dennis Northcutt. It is a lot to ask of a rookie to fill both the KR\PR duties. Apart from Jones-Drew and Brian Witherspoon, a second year player out of Stillman College, the Jaguars have lacked true depth and star power at the KR and PR positions. Thomas, listed at 5' 8" and 193 lbs, should allow Jones-Drew to focus solely on RB duties while adding an upgrade in size to the return role as Witherspoon tips the scale at a reported 5' 10" 175 lbs.

Last year Witherspoon led the team in KR with 52, averaging 24 ypr with a long of 51. He had 17 PR, averaging 11.3 ypr with a long of 38. He did not record any scores. Witherspoon was ranked 21st in the NFL in KR average but was not ranked for PR average due to the low number of returns (per Elias Sports Bureau), though his 11.3 was equal to Darren Sproles of the San Diego Chargers. He did set the club’s single-season record for kickoff returns (52) and kickoff return yards (1,250).