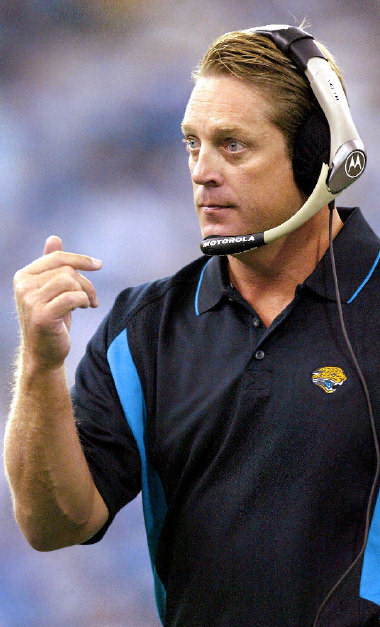 Jack Del Rio gets the national stage to change the perception of the Jaguars.

The third game of the preseason has long been considered the final showcase of the starters. Jacksonville has the benefit of a match up against a perennial playoff team as they visit the Eagles. To state the obvious, the actual game will be taking a back seat to the sociological implications of such a polarizing figure, as Michael Vick will be suiting up.

For Jack Del Rio, the focus of this game becomes just as much about him as it does his players. We know that, for the Jaguars, their 4th preseason game will be an exception as it will not be a respite for the starters. In post-game interviews this past Saturday Jack noted they will see significant playing time against the Redskins.

Typically, you look at the third [preseason] game as your big evaluation game. I'm not sure we'll be able to do that this year. The way it's shaping up, we're going to have to share the workload a little bit to get through it. That's a lot of work in 11 days

The last game [against Washington], we'll look at putting a group [together] that looks closer to what we're going to start in the opener.

At Philadelphia, this means the Jaguars offense will continue to work on it's chemistry along the line and in the passing game. The defense will find strengths and weaknesses in the swapping of a 3-4 and 4-3 scheme. In a year which has such low expectations, continued player improvement (not victories) is how the preseason will be measured.

The expectations on the coach are much higher. Regarding Thursday's game Jack said,

One would not fault Jack for missed blocking assignments, bad routes or bad reads. There are, however, elements which fall directly on the coaches shoulders and he needs to ensure his players and assistant coaches execute much better than they have. He has to manage and direct the energy.

Penalties-The Jaguars were flagged 11 times for 98 yards against the Dolphins and 10 times for 53 yards against Tampa Bay. This ties Jacksonville for 4th in total penalties, a misleading stat since two of the teams ahead of them have played three games to Jacksonville's two. Coming out of a 2008 season in which Jacksonville ranked 6th in total penalties this is a dark indication of a failure to teach discipline and in such a charged environment this Thursday it is important to see Del Rio has prepared his players.

Special Teams-This goes directly to the coaching carousel that has been the JDR regime. While expecting the best from the players Jack needs to get the best from his staff as well. In two games Russ Purnell's group has been highlighted by the tackling of Josh Scobee. The Dolphins managed 127 yards on 4 returns (31.8 avg) while the Buccaneers rolled up 111 yards on 4 returns (27.8 avg). In turn the Jaguars gained 100 yards on 4 returns (25 avg) and 83 yards on 5 returns (16.6 avg) respectively. A failure to win the field position battle is a hit the team cannot take.

Play Calling-This is a lose\lose for Jack. Either they don't have the players to execute or the play calling isn't smart enough to counter the opposition. There is enough talent on this team to expect better than what we've seen. So far both opponents have won time of possession. Third down efficiency was 5-14 (38%) against Miami and 2-14 (14%) against Tampa which ranks them at 30th. Fourth down efficiency was 0-2 and 2-4 respectively. More telling may be the total number of sacks (1).

The Eagles come into Thursday's game with the potential of a divided fan base and the pressure of playing amidst the media circus. Jack has the perfect stage to show a disciplined product. He can either walk off the field as a side note to Michael Vick's return or create a story specific to a Jaguar team on the rise.