Why I Think Coaches get Fired

Share All sharing options for: Why I Think Coaches get Fired 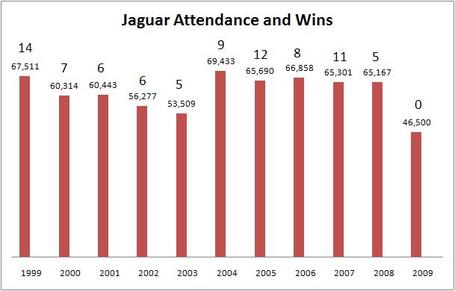 In 2002 Tom Coughlin finished his last season as the Jaguars head coach.  In 2003 Wayne Weaver hired Jack Del Rio to turn the fortunes of the team around. Do you think Mr. Weaver let Tom go because of his win/loss record?

After a number of years of watching football, I have come to believe I know why coaches are fired and in my opinion there are two major reasons:

The first major reason is there is a power struggle with the owner and or general manager.  Good coaches get let go and bad coaches stay employed because of interpersonal relationship skills.  Seriously, do you trade Bill Parcells for Wade Phillips because you think Wade is a better coach?   Marty Schottenheimer is a perfect example of this. Martyball means we play it his way or else. Marty isn't fired for losing the big games, Marty is fired because he is not good at interpersonal relationships with owners. He forgets who is in charge.

The second major reason is the fans turn on the coach. The ultimate decision of whether a coach stays or goes lies with the consumer.  When the consumer stops buying the product, it is hard for the business owner to ignore.  Jacksonville turned on Tom Coughlin, Wayne Weaver didn't.  The city of Cleveland turned on Bill Belichick, Art Modell didn't. Once the fans stop showing up, it hurts real bad.  Most owners feel a part of the community and being shunned by that community hurts. Losing money hurts. The pain must go away. It becomes time for a new direction.

Now you can list a dozen exceptions to these reasons, but I am staying with them for now. When you look at Jeff Fisher, he and the Tennessee fans endured a 5-11 season then 4-12 season and then a 2-7 start to the 2006 season. One thing stood out, attendance at Titan games never budged from selling out.  The owners relationship with Jeff Fisher didn't get strained and the finances of the team didn't get strained. No one enjoyed the losing, but no one actually suffered from it.

I don't believe Wayne Weaver wants to fire Jack Del Rio.  It is too much work to rebuild that whole structure.   Wayne Huizenga gave the entire rebuilding job to Bill Parcells because it is hard work.  I think Mr. Weaver likes Jack. He might also, in hindsight, regret letting Tom go and may not want to make the same mistake again.  I don't know that for a fact but if I were in his shoes, I might think that. Either way, Mr. Weaver will probably not remove Jack Del Rio unless there is no other option except to do so.

But the question about Jack's future, I think, is in the hands of the Jaguar ticket buyers. Right now, the story line is the economy, with last years losing record played as a minor reason.  But Jacksonville isn't Tennessee. they don't have the same history of weathering the storm and simply have less patience for losing than other places.  If Jacksonville equates bad football with Jack Del Rio and doesn't see the hope, I think attendance will be reflective of that attitude. They will demand, rightly or wrongly, a new coach before returning to the stadium. They did it before and I am not sure they aren't doing it again.

If Jack Del Rio brings good football, he can probably stay forever, but Jaguar fans haven't seen a good Jaguar home game in over a year.   The thing that stood out to me was only 46,500 fans showed up for an NFL home opening game and those that did, booed their team. Wow. I don't believe I have ever seen that before and it definitely was noticed. Jack has been available to the media everywhere asking for patience but when Tony Boselli calls for a change in coaches, the battle for the hearts of the fans is on.

Don't bother quoting Vic or Peter King or Walters football about Jack's fate. Watch attendance and fan attitude at the home games. I think that is the real barometer of whether we see a new coach or not.