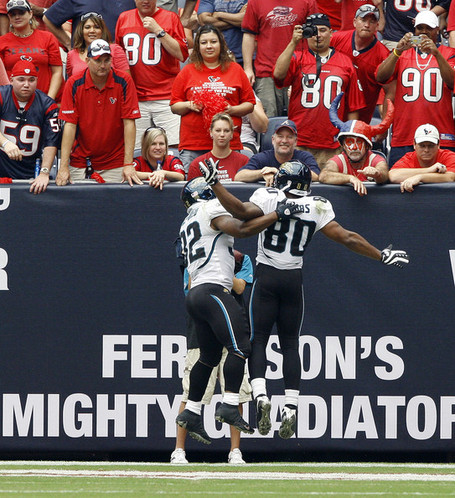 By now, you should officially be in the throes of that emotional swell you'd receive from seeing that hot girl across the bar (or guy depending on your gender or...no need to go there). This past Sunday you caught a glimpse of what can happen when the Jaguars look in the closet and pick out that matching ensemble. By that I mean, both players and coaches coordinating.

So, now you find yourself going into week 4 with a Titans team coming to town looking like they've been ridden hard and put up wet. Can you feel your heart beat a bit faster? Is your tummy feeling funny?

Surely you find yourself contemplating the next hill they'll climb when Jack says:

"I like the energy, I like the effort. The way we’re approaching it, we will improve. It’s not maybe, it’s a matter of how much."

What's not to like? Grabbing Battle Red Day by the horns and wrestling away all the optimism the Texans had going into their game against the lowly Jaguars. Not folding after the Sims-Walker fumble. When Daryl Smith recovered that football it was almost as if that girl gave you her phone number, right after laughing at you for asking.

Might I suggest you dial the number before leaving the bar. Or maybe get a look at her in some good light.

Not to take anything away from the victory, but before the message boards and phone lines are filled with any thoughts of this team making a turn there should be some serious consideration of who the Jaguars beat.

Compare that to the previous teams they've played:

Had you not known, I doubt you'd be shocked if I told you the Jaguars beat the Texans by 7, lost to the Colts by 2 and lost to the Cardinals by 14. Before you point out the Jags had to throw more against Arizona, I'll remind you that, save the 36 yard run early, MJD averaged 2.5 ypc for the game.

This weekend the Titans come to town boasting the 2nd best rushing defense in the NFL, yielding 60.7 ypg. The hope would be Garrard could exploit their 28th rated pass defense which giv es up 274.7 ypg, but that assumes the Jaguars 19th rated passing offense can improve on their 202.7 ypg average.

Defensively the Titans are again near the top in sacks with 7 for the year.

Feeling down? Remember...this is a roller coaster.

Vincent Fuller is out for 6 weeks with a broken right forearm, hurting their depth. Cortland Finnegan is nursing a sore hamstring. Tennessee hasn't been able to get consistency from their Special Teams and they haven't been able to hold a lead late in any of their 3 loses.

Kerry Collins has gotten progressively worse with each passing game, with no help from untimely drops by his receivers. While C.J. has been terrorizing defenses, LenDale White has yet to add that second punch.

Yet, the one thing that cannot be ignored is that across the field stands Jeff Fisher. In the last 7 trips, the Fisher lead Titans are 5-2 in Jacksonville Municipal Stadium.

If the opportunity is to exist for a victory it must reside with the defense. In two of their three games the Jaguars have won the turnover battle, something the Titans have failed to do in their last two games. Once again an immobile quarterback comes to town, this time with much less talent at receiver. In fact, after facing Wayne, Fitzgerad and Johnson the defense should embrace the moment. This is the game to unleash the blitz packages.

The most compelling question may be who needs this game more? Tennessee's new mantra is "just win one game", while the Jaguars are hoping this past win will court fans to fill the stadium with their hated rival coming to town. Sending the Super Bowl contending Titans to 0-4 would be a rush for the fans and this young team. This is a great time to walk up and buy a ticket for the ride that is the 2009 Jaguar season.