Will the Jaguars Play in Orlando: The comments have been made

Share All sharing options for: Will the Jaguars Play in Orlando: The comments have been made 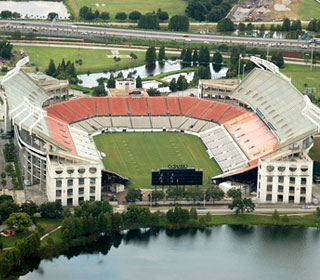 In a statement today, Jaguars owner Wayne Weaver said the Jaguars would consider playing home games in Orlando if the NFL expands the regular season. Key words there, consider and expands. This is far from an official statement saying the team will have an arrangement similar to the Bills and Toronto.

In addition, Orlando simply doesn't have a facility the NFL would even waste time with not approving with now. The Citrus Bowl is in even worse shape than the old Gator Bowl and UCF's new stadium is even worse from the NFL's stand point.

Also considering the expansion to a 17 game season wouldn't happen for some time, this is at best a long term plan and more likely simply the an idea out of a brainstorming session that will go nowhere.

If you have Comcast's "Sports Entertainment Package" on digital cable, then you already have NFL Red Zone. If you don't, then this Sunday is your chance to see what you're missing, as Comcast is offering a free preview of the channel from 1-4:15 p.m. ET. (Also check out Comcast's On Demand video library, which includes tons of content from NFL Network.)

- Recently moved all of the major sports networks to their most popular tier of service giving it to millions more people at no additional charge, and launched ESPNU. Also offering ESPN360 to their internet customers for free.

- Comcast also has the new NFL Redzone on its Sports Entertainment Package (about $5-7) this channel is getting a ton of buzz, and fans love it. This weekend Comcast will offer the NFL Redzone for free to all of its 17 million digital customers. The ³free-view² will be available this Sunday, October 4 from 1 PM to 4:15 PM EST.

- We also have On Demand content from the NFL network whose game recaps of every game every week, draft profiles, player profiles, etc. We also have this type of content for specific teams including the Eagles, Steelers, Bears, Broncos, Seahawks.