I think the Washington Redskins let us win.  The Jaguars can't be this good, can they?  It seemed like a lot of things worked well and the Jaguars got answers to a lot of questions.  Let's start with the receivers...

Troy Williamson.  A lot of short balls were thrown his way tonight and he bobbled a few but hung on to most of them.  It was as if they wanted to see if his recent catching ability was real and it seemed to be.  He looked every bit the reliable receiver again tonight. I think they were game planning with short passes to open up a long ball, but it never came.  Troy Williamson is a starter.

Torry Holt.  Used as a decoy again tonight and played quite a bit.  They sent him deep and then had Troy come across the middle.  Some very nice patterns from Dirk Koetter. Torry played his man all night until that once when he didn't stop and curl back, he slipped past. What a nice ball David placed in there. Well here, see for your self. 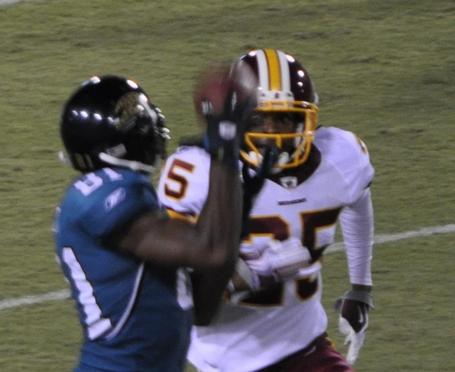 Mike Simms-Walker.  OK, I am not being fair.  Mike Simms-Walker was the star of the night.  What a standout talent he was. Anyone, especially anyone named Collin (just kidding buddy!), who thinks this guy isn't worth keeping didn't see the game tonight. MSW was on fire from the get go and was not going to be denied anywhere near the goal line.  You could tell he wanted it and had the ability to deliver.  TH, TW and MSW are your starters.

Jarret Dillard. He got a lot of work tonight and the plays were passes along the line of scrimmage as if to see if he had RAC ability.  Nothing developed for him except he had no trouble with his hands. The two point conversion was a JD play all the way and he was up for it.  Based on the time he got, they are evaluating him against Mike Thomas.

Nate Hughes. Worked out as a return man tonight and didn't work out too well.  He is confused on the run back. Go here, no wait, try that way, no wait maybe this way.  On one punt if he had fallen down he would have gained more yards.  Just didn't have it.

Mike Thomas.  A bit of ability.  Where Jarret had the route running, Mike has the power and speed.  Nothing flashy tonight.

Running Backs... Clearly it was Chauncey Washington verses Rashad Jennings. Rashad Jennings can run with the ball but he doesn't move the pile.  He can catch and run and looks best out of the backfield.  I think I saw more from him even though Chauncey got the nod early and worked with the first team.  I just though Jennings was tops tonight.

Rookies on the Offensive Line. Much as I like and root for Eben Britton, he got beat tonight and David paid for it.  Here are some photos to show it. 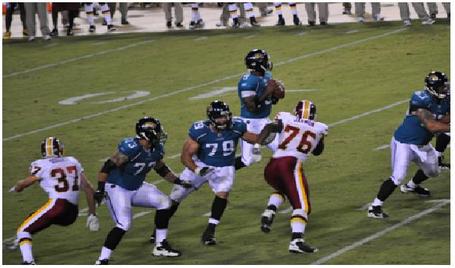 David paid the price on this on as Reed Doughty came in on a safety blitz. 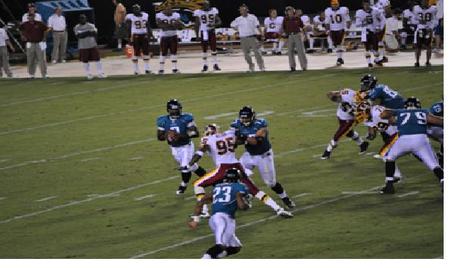 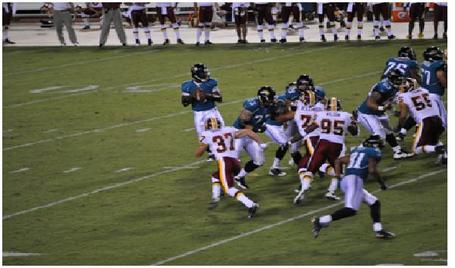 Once the Redskins figured out the weakness, David got it again. The right side was wide open.

Well, that is enough about Eben. He is headed for the Hall of Fame, so we will give him a few moments to learn,  He better learn fast, however, because behind David is Todd Bouman.  If the Redskins let us win, Todd was paid to give it back to them.  Wow, Jack may have faith in him, but I struggle to.  Enough negative, there was too much positive, let's give out more game balls.

Game ball to Quentin Groves!  Hey Twitter world, something to cheer. Quentin had a great special teams play and a great forced fumble. The thing I noticed was he wasn't getting pushed around tonight. He stood his man up and stayed in the play.

Game ball to Tyron Brackenridge. Tyron's hit on the kickoff forced the fumble.  Fast down field and powerful in the play.  Game ball and roster spot if I am judging.

Game ball to David Garrard.  Still can't avoid a sack to save his life, but he got protection most of the night and did lay in some nice passing.

Game ball to Dirk Koetter. The mad genius continues to amaze me with the play book. Runs to the left looked good tonight in that some of them worked.  Misdirection with receivers all over the place. It is beginning to look as sophisticated as the Indy offense.

OK, it is getting late and I will write more over the weekend, but one last mention to go out. Derek Cox. Derek Cox can diagnose a play faster than anyone on the field and get in the action while others are standing around. 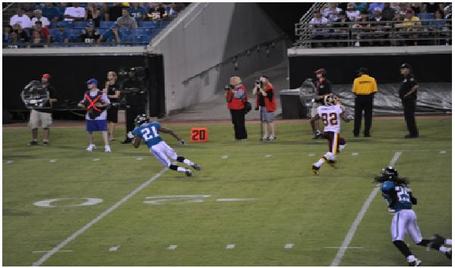 Here is Derek peeling off his assignment as he diagnoses the play. 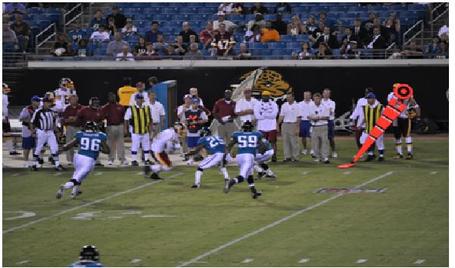 and sticks the guy while Brian Williams stands frozen.  Nothing against Brian, he played well.  I have more pictures of Derek with his head in the game. 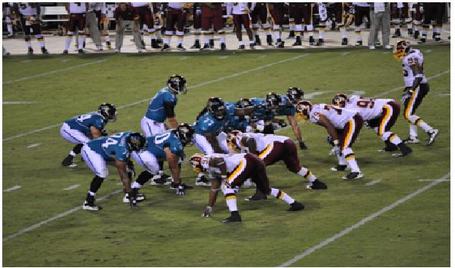 That's Uche calling out the blocking assignments from the center position.  I didn't see that one coming.

A solid effort. The offensive line will be the area of work in the first six games so we need patience. I just hope David can survive it.  I saw a good team tonight. Very disciplined, low penalties, very much in control.  They played their game. Of course Albert Haynesworth may have changed that, but I think they are ready to start the season. Indianapolis couldn't be a better starting place.