Meet your new Jaguars - For now

Share All sharing options for: Meet your new Jaguars - For now

Gene shaved Tony Pashos from the movement. Turn in your beard Tony you can catch a ride with Brian.. 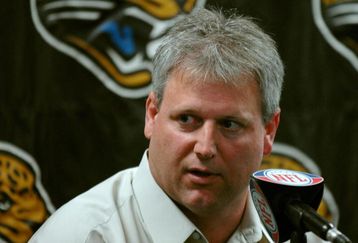 Gene was ruthless in creating this roster.  Tony Pashos was called in and asked to take a pay cut, not an unreasonable demand since guards make less than tackles.  Nope, no deal was the reply and goodbye was the answer.  Brian Williams got cut. Joe Zelenka needs a goodbye event, however.  He was too much a part of this town to not say goodbye with class.

Also, we understand that if Luke McCown passes a physical, he will be handed a playbook. If David goes down and Luke starts a few games, we may lose a 5th round draft pick next year. Eugene and Eben hold a lot of our future now, but no holding allowed.

Run the ball stop the run, that is the motto.  We have a lot of people to stop the run, but not a lot doing the running.  It looks more like, stop the run, fake the run.  Dirk Koetter. the mad genius, is bringing the Arizona offense to Jacksonville.  Ten guys who can catch are on this team. MJD is still listed as the designated kick returner. (shhh I don't want to break the news to him but I think Spoonie got that job). They are certain Greg Jones is a running back as he is designated FB/RB.  No offense Greg, but we need a calander to clock your time to hit the hole, but you are great near the goal and clearing a path. Glad you are here. We were 2 to 1 passing plays over running plays in preseason. This roster reflects that.

Basically, if you were drafted by Gene you are on the team, except Tiquan Underwood.  I am guessing he will reappear soon. I think this is closer to being a young team than it was before. I will say this, it is a different team.  When I look at the final roster, however, I think I am happy. It looks and feels and acts like a fun team to watch. Buy a ticket and go find out for yourself.

Here is your 53 man roster - for now. Let us here at BCC hear what you think.