Jaguars Sit Lewis and Holt: Offensive Rookies Must Step Up

Share All sharing options for: Jaguars Sit Lewis and Holt: Offensive Rookies Must Step Up 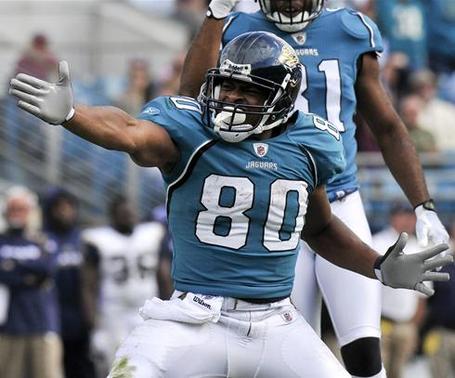 Mike Thomas, along with a handful of other rookies, will play a major role in Sunday's game.

The Jacksonville Jaguars released their final injury report and it does not bode well for the offense. Marcedes Lewis and Torry Holt will both miss the final game against the Cleveland Browns, Lewis due to last week's concussion and Holt an injury to his hand.

Cornerback Rashean Mathis's groin injury will sideline him while they lose depth on the defensive line as Atiyyah Ellison will sit due to a knee injury.

This game was ripe for an offensive breakout on the road, something we have seen only once this year. Cleveland comes into the game ranked 29th in the league in pass defense, 32nd total defense, having given up over 300 yards in all but three games. They don't fair much better stopping the run yielding 145.5 yards per game.

Now the idea that Dirk Koetter could lead a balanced offensive attack has been dealt a serious blow with rookies required to play an even bigger role.

Having Lewis and Holt on the bench means David Garrard loses his second and third rated yardage leaders. Not only that, Maurice Jones-Drew loses a staple in the rushing attack, an area already impacted by the loss of Greg Jones.

The tight end spot will now be occupied by converted wide receiver Ernest Wilford and converted quarterback in rookie Zach Miller. Neither of them are known for their blocking skills and between them they have 23 receptions for 266 yards and one touchdown. Compare that to Lewis's 32 receptions for 518 yards and two touchdowns and you have a significant drop. Of the two, Wilford will probably stay in to block leaving Miller as the primary pass catching tight end.

Holt's absence further exacerbates the situation.  Rookies Mike Thomas and Tiquan Underwood will be asked to play a larger role as will Nate Hughes, someone who could just as easily be considered a rookie. Thomas thus far has performed well in the third receiver spot, a point validated by him needing only six catches to pass Drew for most receptions by a rookie.

But both Hughes and Underwood come into the game with little to no experience and this means the most hit quarterback in the league will drop back looking at players he has a limited relationship with.

Due to the injuries we can should see a heavy dose of Drew and rookie Rashad Jennings on the ground. However, Cleveland  will counter by stacking the line to stop the run, an area which during their three game win streak the Browns have shown improvement allowing over 100 yards only once.

If that happens the potential will exist for big plays through the air.  With Cleveland probably keying on Mike Sims-Walker when he has to throw, Garrard must elevate the play of his young receivers.

This may be "the game" where we see how good Gene Smith was in the draft and how good Jack and his staff (Todd Monken particularly) did at coaching. Throw in Eugene Monroe and Eben Britton and the offense could field six rookies at any given time. Winning on the road with so much youth would be almost as good as making the playoffs.