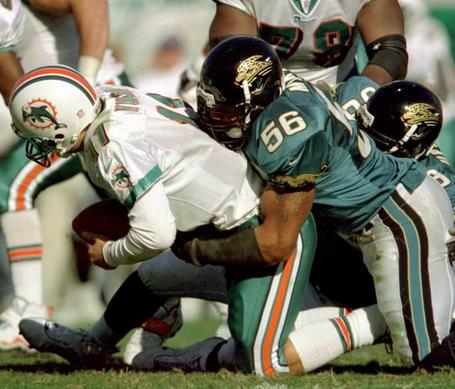 This Week in Jaguars History is going to be a weekly series to start off our Monday mornings.

1/12/97 - The Jaguars lose to the Patriots in their first ever AFC Championship Game to finish a magical season.

1/17/03 - Wayne Weaver hires Jack Del Rio to replace Tom Coughlin, making him only the second coach in the franchise’s history.

1/12/08 - Tom Brady and the undefeated Patriots end the Jaguars playoff run in the divisional round with a 31-20 victory.

1/12/09 - Gene Smith is given a promotion to become the first official GM in team history.

Which current Jaguar player holds the franchise record for most yards per rushing attempt with 11.0?

He has 4 attempts, 44 yards and 2 TDs in his rushing career