Jacksonville Jaguars: 2010 Will Be a Season of Trust

Share All sharing options for: Jacksonville Jaguars: 2010 Will Be a Season of Trust 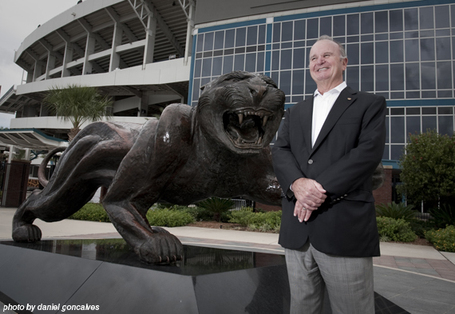 The option was a lose\lose for Wayne Weaver. When your fan base is divided on the head coach, there is no way to come out a winner. So, as the announcement that Jack Del Rio would remain echoed from keyboards and media air-waves across the land, those in the "Fire Del Rio" camp could be heard cancelling their season tickets.

Not unlike a child who has decided to take their ball and go home because the game isn't being played the way they want, some in this segment of Jaguar Nation have decided that if they don't like the coach, they aren't going to the games. Questionable logic, in light of the fact that poor attendance will eventually lead to the Jaguars leaving Jacksonville.

For anyone opposed to the decision it is a simple question you must answer: Whom do I trust?

We first had to address this when the rumors started flying about with respect to the USC position. Stories varied from Jack taking the job to Jack staying put. BCC had its share of residents offer up "sources' who claimed to have insight into the situation. How many out there trusted Michael C. Wright when he wrote Del Rio wasn't leaving?

After that warm-up came the big test. The moment where we closed our eyes and fell backwards with the words "I'll catch you", resonating from Wayne's mouth. We asked ourselves, "Will he really be there?"

When he walked to the podium and said, "Jack is committed to doing the things we have to do in order to bring this team to an elite level", many fans surely felt not the safety of Wayne's arms but the smack of a cold floor. You may have bumped your head on the way down but you weren't dropped.

The premise we have to operate from is that Weaver wants this team in Jacksonville. If you accept that as truth, any decision he makes is in the best interest of the franchise. He couldn't have been clearer when he said:

Fans need to have enough trust in me that I'm making the right decisions.

Over the past seven years, however, trust has been hard to come by and has definitely been tested. Weaver, to his credit, recognizes that. Rather than throw Shack Harris under the bus he put the accountability directly on his shoulders for the failed first-round picks and free agent acquisitions. He also didn't absolve Jack or Gene Smith of blame, noting that the Jaguars will only succeed if the three of them do their jobs better.

Unlike the Tom Coughlin era, which saw Pro Bowl first round selections of Tony Boselli, Kevin Hardy, Fred Taylor, Marcus Stroud and John Henderson (along with Pro Bowl level talent in non-first round picks of Tony Brackens, Donovin Darius and Brad Meester), the assessment may be that Jack has done more with less.

The acknowledgement of those collective failures may go a long way in alleviating some of the perception that Del Rio should carry most of the blame. Weaver was also quick to point out that he believes 2010 will be a playoff year, a vote of confidence not only for the coach but also for Gene's ability to deliver another winning draft.

Weaver still must contend with the negative perception some have of Del Rio. To this he responsds, "Fans aren't as close to the decision process." He further noted that money was not a factor in the decision, adding "I want to win."

Carrying the accountability mantra one step further was his very direct criticism of the players, most notably David Garrard. Citing the work Peyton Manning put in, driving three hours twice a week to work with Pierre Garcon while he finished up college courses, Wayne sent a message that "We need to do more of that here."

On the surface this may present itself as solely a coaching failure but Weaver would rather qualify this also as a player responsibility outside of the game day performance. This lack of preparation and effort is an echo of the comments made by Fred Taylor before the New England game and may account for an offense which seemed to find any consistent balance, and a defense which at times appeared lost. More directly, as per Wayne's example, it may be a direct cause of Garrard being the most hit quarterback in the league.

Maybe the most telling move is the one that effects the fan's bank accounts. Recognizing the factors of a small-market require a different approach to running a team, Wayne stressed that the economy was more of a factor in the attendance problems of this past season and that he needs to work harder at making tickets affordable where he can. The lowering of prices in certain sections and the 30/30 payment plant are steps in the right direction.

But, isn't that uncertainty the nature of the NFL? Surely fans of the Titans and the Steelers didn't expect to be watching the playoffs. Yet they will trust that in 2010, regardless of their sentiment, decisions will be made which will lead to a Super Bowl ring.

As Weaver must put his trust in the community that they want the Jaguars, so to must Jaguar fans put their faith that all of his business decision will have a return on investment. The simple fact is that if you don't trust, the product may not be available. This isn't a fear tactic, rather a simple fact and one not missed by Wayne.

The question to the community, do you value being an NFL city?