Why is Jack's inner circle leaving?

Share All sharing options for: Why is Jack's inner circle leaving? 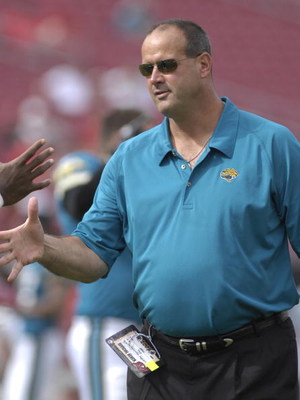 With the recent departures of Ted Monachino, Kennedy Pola, and Mike Tice from the Jaguars' staff, questions have arisen as to what is really going on inside the Jaguars organization. These departures have been espescially puzzling since these coaches reportedly were Jack Del Rio's "Inner Circle" and provided an echo chamber in the locker room.

So then, why is it that these coaches have now either been fired (Monachino) or taken lateral moves with other teams (Pola, Tice)? I think we have to look back at the meeting between Jack, Wayne, and Gene for the answers. I'm going to borrow a few quotes and ideas from Terry's piece on Black and Teal which you can see there.

The two telling quotes from Wayne Weaver are

"Shame on me that I haven’t done (extensive reviews of the organization) more. Shame on me — for if I would have dug deeper in some of the earlier years with some of the personnel things going on in this building – I would have had a different result," Weaver said.

What Wayne, in essence, is saying is that he let questionable hires slide and now it's time for that to come to an end. That is why we bid adios to Ted Monachino. You don't coach a unit that ranks in the Top 5 Fewest Sack totals All-Time and manage to get to have another year. Joe Cullen's units in Detroit all had sack totals over 30 while he was there, and think about the talent on those Lions teams.

The accountability issue also arose with Tice. Was he a good coach? Yes Did he both provide an unneeded echo chamber for Del Rio? Yes. If the reports are true that he was Jack's Chief Lieutenant on the staff, then I can see why it was needed for him to leave town.  If the person Del Rio's trusts the most of staff simply yes's Del Rio to death, what good does that do?

As for Pola, who knows. It is known he wants to be an offensive coordinator and I guess he figured the road would be easier through Nashville than staying in Jacksonville. It is known that he and Tice also had a lot of input on the offense, to the chagrin of Dirk Koetter. That may have well been another underlying factor.

Either way, it is clear that the organizational structure of coaches being "In" or "Out" is coming to an end quickly. Jack knows it's do or die and he'll have to do it without several coaches he's confided in. Will he rise to the challenge?

PS
Next time you guys hear from me I'll be in Miami covering the Pro Bowl.