On paper the Dallas Cowboys have had a great season in comparison to the Jaguars. Their offense is one of the best in the league, ranking 5th in average total yards a game (375.7) where the Jaguars are ranked 25th with an average of only (301 yards a game). Their defense also looks great on paper ranking 10th overall in yards allowed a game (7th in Passing yards, 21st in Rushing Yards) compared to the Jaguars woeful 30th ranked defense. Even when you compare both teams in turnovers the Cowboys, though not stellar, are better then the Jaguars ranked at 23rd in Turnovers (-2) compared to the Jaguars who are ranked dead last (-10). Overall on paper the Cowboys should be one of the best teams in the league and the Jaguars should be near the bottom but the NFL doesn't always mirror statistics. This year the Cowboys who were Superbowl contenders prior to the season are 1 - 5 while the Jaguars are 3 - 4. How is this possible you ask? Its very simple, self-inflicted mistakes and penalties. 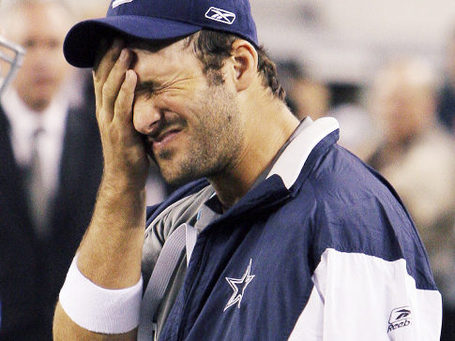 The Cowboys are underachieving by everyones standards this season. The team that many had winning the NFC East and playing in the Superbowl has already lost their chance and it is only Week 8. The Cowboys have a talented roster with players in their prime (Tony Romo, 32, Jason Witten, 28, Miles Austin, 26, Dez Bryant, 22) and a strong defensive unit. The Cowboy's should be 5 - 1 right now, but they are not, and it is no ones fault but their own. Game after game they have lost because of simply and dumb mistakes. Lets look at how they lost each of their games:

- At the end of the first half they try to force a play, it ends up turning into a fumble returned for a TD

- On a drive in the 4th Quarter that could have put them back in the game, Roy Williams fumbles

- After TD, Jason Witten and Marc Colombo charged with excessive celebration for spiking the ball, on ensuing kick off Marc Mariani of Titans has a big return to give Titans great field positon which they use to score game winning TD

- Tony Romo is injuried and forced to leave

As you can see the Cowboys have been shooting themselves in the foot all season long. This team which was heading in the direction of the Superbowl is now already being counted out of the playoffs in Week 8 because they can not stop making stupid mistakes. Every team has a game or two where they make a mistake and it costs them but to consistently make mistakes like this is simply ridiculous. If I was Wade Phillips I would already have my bags packed because you can't blame all of this on the players, there is too much talent on this team. The blame must be squarely put on the coaching staff. The Cowboys are still a good team, they have the talent, but their spirits are crushed and their motivation is already lost because they are already out of the running for the playoffs.

The Jaguars on the other hand are going in the opposite direction. Where the Cowboys are supposed to be Superbowl contenders, the Jaguars are still rebuilding. Going into the season, once again most analysts gave the Jaguars no shot to make the playoffs or even get past 6 wins but through 7 weeks they are 3 - 4. Is 3 - 4 a spectacular record, no, but given the circumstances its great. The Jaguars defense has more holes then swiss cheese and has made the weakest of QBs look like Pro Bowlers. On offense the Jaguars have a revolving door at QB where none of the 3 are able to really do too much. Through all of these problems the Jaguars have scraped out 3 wins and have a young core of players that give fans hope that in a few more years after a few more drafts, the Jaguars will be great. You look at the Jaguars roster and you see Jones-Drew, Deji Karim, Mike Thomas, Mike Sims-Walker, Marcedes Lewis, Eugene Monroe, Rashard Jennings, Tyson Alualu, and Terrance Knighton. All of these players are great young talent that given a few seasons will make the Jaguars a good team.

Even though Jaguars fans have seen some pretty crushing defeats this season and it is upsetting, most of us realize that this season wasn't supposed to be special. This season was supposed to be the 2nd season in a long rebuilding process. We all secretly hoped for the best but we didn't expect it. The Cowboys on the other hand are the complete opposite. Their entire fanbase expected the best from their team, they expected to make the Superbowl or at least the NFC Championship game. Even though both teams are not having amazing seasons, the Cowboys and their fans are sitting around wondering what could have been as Jaguars fans sit around and wonder what will be.