Stretching the Defense and Taking Advantage

Share All sharing options for: Stretching the Defense and Taking Advantage

The Jaguars rushing offense is rolling and they'll hope to continue that trend in Indianapolis tomorrow. The Colts know this and it's only logical that they'll go to extra measures to try to slow down Maurice Jones-Drew and company. What teams have done in the past, and will likely continue to do, is to put more than seven defensive players in what is referred to as "the box."

"The box" refers to the area of the field directly in front of the offensive line that usually includes linebackers and defensive lineman. When teams find success against the run, defenses will often go above the usual amount of seven players in the box and bring an extra safety or linebacker to help stop the run. The Jaguars have established themselves as a rushing team first for years and have dealt with extra men in the box as such.

The need to "stretch the field" has been talked about ad nauseum among fans of the Jaguars for a few years now. That is to say, take advantage of the lack of deep protection from the defense and hit them with deep passes. No play was a better example of taking advantage of the extra players in run support than the 48 yard touchdown pass from David Garrard to Jason Hill.

The Jaguars bunched up their formation with only receiver in the game, Jason Hill, despite a 2nd & 18 situation. The Raiders kept their normal personnel in with 4 defensive lineman and 3 linebackers. However, all but one player scooted up to prepare for a Maurice Jones-Drew run. 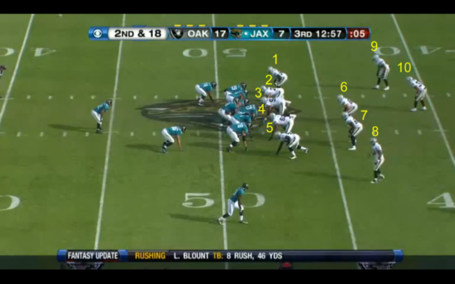 The only player in position to defend Jason Hill is #24 for the Raiders, Michael Huff. Huff, usually a free safety, was lined up about 10 yards off the line of scrimmage across from Hill.

A play action fake froze the 10 players at the line of scrimmage long enough to ensure that the only player left to defend Hill was Huff. 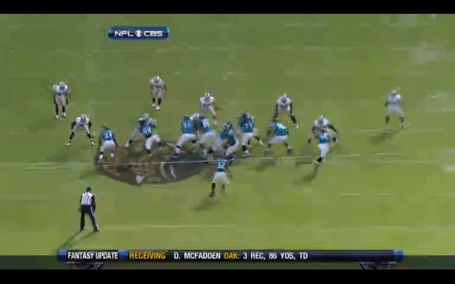 As can by seen by the above picture, the center of the field was left uncovered by Oakland safeties. This gave Hill the ability to run a simple post pattern to the middle of the field and force Huff to defend him alone. 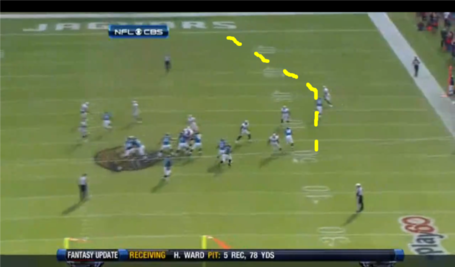 The result of the play was obviously a very important touchdown, but what that play provides is much more than just points on the scoreboard. By making plays such as that, the Jaguars force teams to back up and respect the threat to score over the top of the defense rather than simply through it. In doing such, the Jaguars will have a better ability to run the ball.

Seeing 8, 9 or maybe even 10 players in the box is something the Jaguars will likely have to deal with against the Colts and other teams moving forward. Here's to hoping the Jaguars can take advantage in the same way they did against the Raiders with a 48 yard pass that proved to be a turning point in that game.