During the draft, trades between picks are made according to a value chart that determines a value for each pick. For example, a team wanting to trade up 3 spots to get a player would first need to determine how much value they will be gaining and what they should offer their trade partner as compensation.

The only trade value charts available to fans have been online and they are all very similar, if not identical. With changes in the NFL over the last few years, specifically in the rookie salaries and depth of rookie classes, this generic chart has become outdated. A good example of this was a trade between the Colts and Dolphins in the 2009 Draft. The Colts traded up to the 56th spot and gave the Dolphins their 61st and 165th spots. According to the generic value chart on the internet, the Colts acquired 340 value points with the 56th pick and gave up 292 for the 61st pick. To compensate for the 48 point difference, they added the 165th pick; however, that pick is only worth 25.4 in the old chart. Why would the Colts offer that pick and why would the Dolphins accept when the Colts had the 127th pick worth 47 points available for trading?

In fact, according to the old chart the teams trading up won their trades 7 out of the first 8 times in the draft. This obviously indicates that the higher picks have been devalued in recent years.

What I set out to do was create a chart that more closely represented the values of the picks according to the general managers. I took draft day trades and adjusted the chart values to make the lopsided trades such as the Colts/Dolphins trade more even. So here is the Big Cat Country 2010 Trade Value Chart and what I undoubtedly consider to be the most accurate chart available to fans: 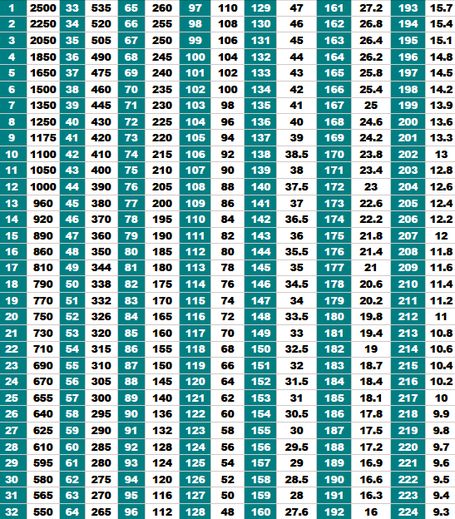