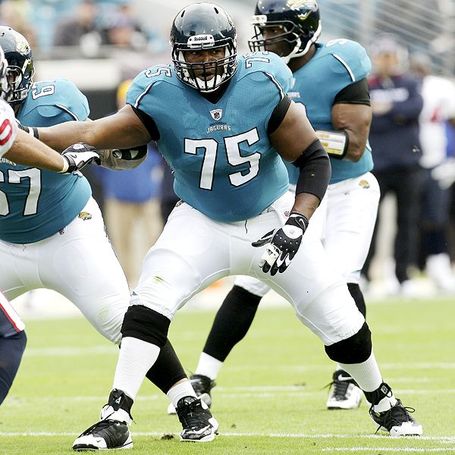 It's become clear that everyone is getting tired of all of the pre-draft speculation so I figured it would be a good time to take a step back and look at the more tangible parts of the Jaguars right now. With the team for all intents and purposes done in free agency, we can take a look at how each unit holds up heading into the draft.

The first unit we'll take a look at is the offensive line. Besides WR, no unit went through more retooling in 2009 than the O-line. The Jaguars started two rookies at the tackle spots, and had Uche Nwaneri at guard. On paper, the results weren't exactly what the Jaguars would want. David Garrard was sacked 42 times last year and there were several times last year when the team couldn't get the necessary push in short yardage situations.

The interior of the offensive line was a major weakness for the team. Brad Meester and Vince Manuwai, previously rocks of consistency for the team, were let down by age and injuries.

However, as the year drove along, things began to improve at some areas. Most notably was the play of LT Eugene Monroe. After an inconsistent start to the season that included low points at San Francisco and Indianapolis, Monroe began to show why he was the eight pick in the 2009 draft. He stonewalled Dwight Freeney in their rematch in Week 15 and began to develop the mean streak necessary to play run blocking. In short, he began to show the promise of begin an elite left tackle and cornerstone of the Jaguars offensive line.

His rookie teammate Eben Britton did not fair quite as well across the way at right tackle.

For those of you who may not be familiar with this chart, it's a track of his performance according to Pro Football Focus. While Britton had a short burst of playing well in the middle of the season, it's clear he struggled for the most part in his rookie year. Perhaps he just needs this offseason to get into the groove of things and this baptism by fire will have paid off. However, it's clear why some people are suggesting the Jaguars look to grab another RT and kick Eben to guard.

Uche Nwaneri was statistically the Jaguars best player on the line. After sitting and playing in reserve roles for two years, the third year player finally broke into the starting lineup and played very well. He didn't allow any sacks, the only player on the line who managed that feat. He wasn't the best supporting the running game, but if he continues to improve, that will change.

By far the most disappointing player for the Jaguars last year was Brad Meester. After being a model of consistency for 10 years at center, Meester ended up being ranked 33rd in the NFL at center according to PFF. Considering there are only 32 starting centers in the NFL, that's Jamarcus Russell bad at the position. It's clear that we have another sad case of a good player who's mind knows what's going on, but his body can't react fast enough anymore. The failed 4th down conversion in the Miami game is all you need to know about the state of Brad Meester.

Not far behind Meester was guard Vince Manuwai. Before this year, Manuwai was seemingly the heir apparent to Fred Taylor's title of the Jaguar screwed out of the most Pro Bowls because he plays in Jacksonville. However, the injuries he suffered in 2008 continued to have their affects on him in 2009. His ACL injury may need two years to fully recover, and if so, he'll need to show he's 100% back in 2010.

The Jaguars had scouts at both Florida and Idaho's Pro Days. No surprise that the Jaguars were looking at Idaho guard Mike Iupati and Florida C/G Maurkice Pauncey. While both players aren't worth the #10 pick, they become options if the Jaguars get a good enough offer to trade down into the middle of the first round. Either would help the Jaguars by allowing the team to move Uche to Center and giving an excellent youth core on the line.

Another possibility is to take Anthony Davis or another tackle, put them at right tackle, and then kick Eben Britton to guard.