A brief history of Pro Football in Jacksonville

Share All sharing options for: A brief history of Pro Football in Jacksonville

The history of football in Jacksonville is certainly an interesting one. Normally when Jacksonville's football history is brought up, it is summed up as first was the Florida-Georgia game, then the Bulls came along, and finally the NFL was convinced to award the city an expansion team. Actually, there is a far longer and more interesting story to be told about Jacksonville's journey to getting a professional football team.

Did you know Joe Namath played several games at the old Gator Bowl? Or that Jacksonville was scheduled to host a Pro Football championship game almost 30 years before Super Bowl XXXIX?  Now that there are posters on here that weren't even born when the Jaguars kicked off their inaugural game vs the Houston Oilers, this is all ancient history. However, maybe we need to remember just how much the city wanted to get a franchise to make sure we keep the Jaguars. 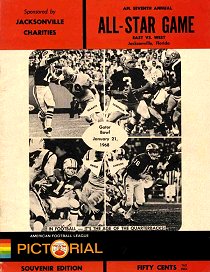 The 1968 game was particularly noteworthy because it featured easily the largest crowd to attend the AFL All-star game, with around 38,500 people in attendance. After hosting the 1969 game, city officials began to make the necessary steps to get an expansion franchise for the city. However, the merger agreement between the NFL and AFL would ultimately prevent the city from getting a team.

Professional football would once again return to Jacksonville in 1974. This time, the city would have it's own team as part of the World Football League. The Sharks quickly rose to become one of the league's main franchises. They boasted a season ticket base of almost 18,000 and had several games with attendance over 50,000. In addition, the World Bowl (the league's championship game) was scheduled to be played at the Gator Bowl.

However, financial difficulties offset both the franchise and the league as a whole. The team admitted it gave away almost 44,000 tickets to inflate attendance numbers. The team folded 14 weeks into the season and the World Bowl site was moved.

The team was revived for the 1975 season as the Jacksonville Express. However, it was all for not as the World Football League finally collapsed due to financial strains half way through the 1975 season.

After the Sharks folded, a familiar cycle would happen for the city of Jacksonville. A NFL owner would dangle the carrot of having a NFL franchise, use it to leverage a deal with someone else, and leave the city ultimately with nothing.

The first, and most egregious example, was Bob Irsay and the Colts. In August of 1979, Jacksonville staged "Colts Fever Night." Over 45,000 people came to simply see Irsay land in the middle of the field as the Gator Bowl. As they chanted "We want the Colts" it seemed as if Jacksonville was on the verge of finally getting a team to call it's own.

However, things hit an impasse when Irsay made several demands with the city, including a new stadium to replace the Gator Bowl. When things came to a halt, Irsay would then go on to negotiate with the city of Phoenix, had negotiations fall apart there, before finally bailing out in the middle of the night to Indianapolis. 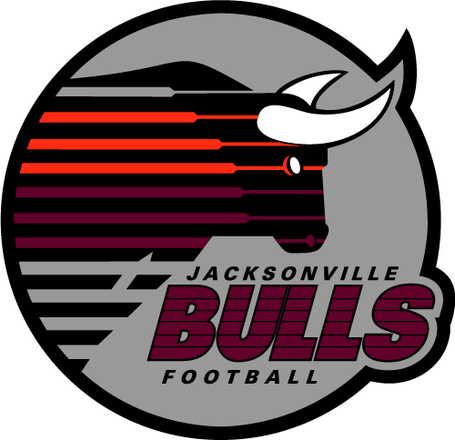 In between Colts fever and being abused by several other NFL franchises, Jacksonville was awarded another Pro Football team. The Jacksonville Bulls are often cited as THE reason the NFL ultimately awarded Jacksonville a team. The team boasted easily the best attendance in the league and were one of the most well off teams financially.

However, the team tanked with the rest of the USFL after an ill fated attempt to play a fall schedule in 1986. The Bulls were easily the most popular team in the league, from a gate standpoint. The Bulls pulled in 4 of the 5 highest game attendance totals in league history.

Thanks in part to the Bull's success, Bud Adams threatened to move the Oilers to Jacksonville in 1987. The city went to similar lengths that it did with the Colts in order to try and lure the Oilers. However, ultimately Houston gave in and renovated the Astrodome.

The last major attempt by Jacksonville to lure a NFL team was in 1988. The Atlanta Falcons were unhappy with the old stadium and played the Jacksonville card. Just as with the Oilers though, Atlanta ultimately gave in and built the Georgia Dome.

It was at this point a group named Touchdown, Jacksonville! was beginning to lay the roots for an expansion team in Jacksonville, and the rest is history.