I put up a mailbag last week and asked for some fan responses to the news that the Jacksonville Jaguars off-season intra-squad scrimmage would be open to only season ticket holders.

Click the jump for some of the fan reaction.

It's a very good idea that the jaguars require fans to be season ticket holders for them to come to the Jags scrimmage. The Jags have made it very clear that without sold out stadiums in the very near future the Jacksonville Jaguars will not exist. Requiring people to become season ticket holders in order to view a scrimmage is vital tough love that the team needs to put on the fans. Why not give extra incentive to those who are actually helping to save the team? Anyways, I'm sure you are going to get lots of complaints about it, but it's probably mostly from the fans that are naive to the fact that their team will no longer exist unless people start going to games.

I agree with it 100%. Its just another perk the Jags are doing for their season ticket holders. If fans want to know and see the future of this franchise, the fans are not going to get it for free! Move the Whale!

(Sorry for an misspelled words; on my blackberry)

Move the Whale! Don't worry, I can't spell either.

The Jags always put on a good show for the scrimmage. They have drink specials, bands playing, and a pretty decent football game. Season ticket holders should be the ones to benefit. I’m glad the Jags aren’t going to allow free football anymore. Not on TV and not the scrimmage.

Thanks Wayne People don’t realize how good we have it. With Mr. Weaver taking away the freebies to fair weather fans, maybe they’ll get it.

You and I both know that "they’ll" never get it.

It's true, the scrimmage is always a good time. It's a nice atmosphere because it's in the stadium.  I think the tough love from Weaver is long over due. And no, some of those freeloaders will never get it.

I love it. Just another perk of being a season ticket holder. The days of the freeloading are over and the scrimmage isn't that big of a deal anyway. Just something to do on a late summer evening.

I anticipate the organization doing something special for the season ticket holders that do attend and that makes me love the team more. The whiners will always find excuses. They can still go to the other practices that are open to the public.

I heard they're going to have free beer and will be handing out bags of gold coins, according to an anonymous source. Guess the people who don't get to go will never know.

Your an idiot. Why would people want to mail you anyway? Your a stupid hack in your moms basemant. The Jaguars were idiots for closing the scrimmage. How are people supposed to know what the product looks like before they by it?

My mom doesn't even have a basement, shows how smart you are. Sheesh.

Here's my work space, much nicer than my moms fictitious basement. 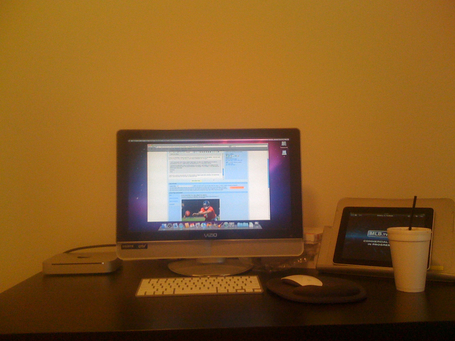