Believe it or not, there will be some Jaguars fans on hand at Qualcomm in San Diego on Sunday other than our very own Adam Stites.

I received this letter from a group of fans heading to San Diego, and thought I'd share: 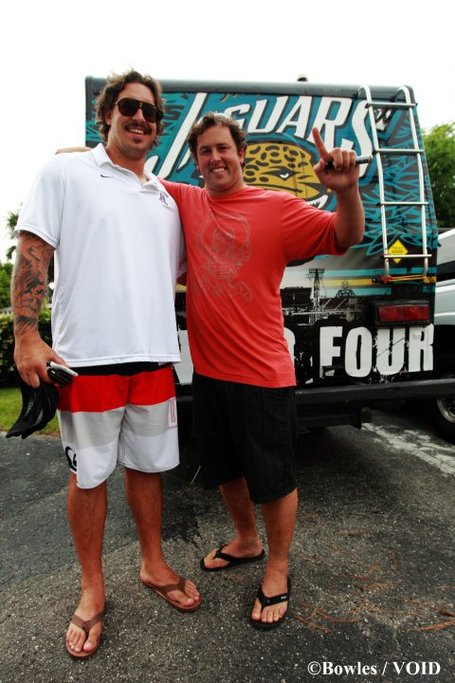 First let me introduce myself. My name is Albert, but most of my friends call me Albe. I live at Jacksonville Beach and a long time Jaguar fan. By meaning long term, I remember getting the Jaguars here in Jacksonville and going to the first game. I have a great story about a group of surfers here at the beach, who are huge Jaguar fans and what started to be something small and soon became huge. Every year we have a group of friends that always tailgate in the new "Everbank Field". It's usually the beach local crowd and a bunch of surfers, skaters, friends, etc... Every year we all decide to go to at least 1 away game to support the Jags and also meet fellow fans and rivals. This year we all decided to go to San Diego, CA for the Chargers game on Sept 19. This all started from a friend of mine named Jay Dodson. He is very well known here in Jax Beach and the surfing community as the sales rep for surfing and skateboarding industry, such as Sector 9 skateboards, Matrix, SkullCandy, Smith Sunglasses, Xtrak, and Watermans here in Florida. He usually organizes all the events. What was supposed to be just a few guys and gals going to an away game, started to become huge. Friends of friends started talking, facebooking, and creating a buzz around the beach wanting to go to CA, to see the new group of Jaguars who are mostly from the West Coast.

See in surfing community, it's always been a west coast vs east coast thing. Friendly competition in surfing has always been great rival against the west coast. Take for instance,Gabe Kling from St Augustine Florida, he recently won the Nike 6.0 this year May in Lower Trestles, CA. He shocked the world in his comeback to win in the west cost and make it back in the ASP world tour. (By the way, he was named honorary captain for the Jags by the NFL). Not to mention the entire Sunrise Surf Shop Team for winning the Oakley Surf Shop Challenge National Title in 2009 and hopefully in September 2010 in Huntington Beach, CA.

Well this years away game to San Diego created such a stir many of our friends are huge Jaguar fans and want to see this rivalry game, so Jay organized our away game that was supposed to be just a small group of friends, but ended up with a huge amount of fan support. Jay and all our friends ended up purchasing over 100+ tickets and the number is still counting... Can you believe that there will be over 100+ Jaguar fans in Qualcomm Stadium? Now that's a true Jaguar Fan Support!! Sector 9 Skateboards even decided to throw us a huge tailgate party in San Diego!

We wanted to show the world that Jacksonville Jaguars is an east coast thing and is not leaving for the west coast! It's funny how a small group of surfers and friends can make a significant impact in keeping our true fan support for a small market team! Like they always say, Jacksonville is a small town trying to become a big impact city! GO JAGS!!! Just FYI...we are all true fans and support our Jaguars by purchasing season tickets. We hope that everyone also shows their support by purchasing theirs as well!