The 506.com has released their distribution maps for the week. I had high hopes that the Jaguars/Eagles game was going to get a good coverage area, since the Jags didn't have to go one on one with either the Bucs or Dolphins. Instead, the Jaguars have been relegated to backwater status. 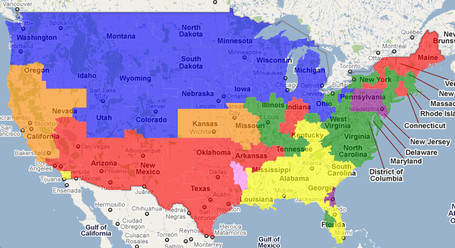 The little purple patches by Jacksonville and in Pennsylvania? Those are the only areas that will be getting the game at the time of this writing. Orlando, Gainesville, Tallahassee, and Savannah will instead be showing Atlanta and New Orleans, while Tampa will be showing Washington and St.Louis over the Jaguars.

Even though NFL broadcast rules would allow all of those markets to show the Jaguars, instead they're opting to show games featuring two out of state teams. I know Florida has a good amount of transplants, but this is absolutely ridicolous.

Granted, these were made prior to the announcement that Vick will be starting for Philadelphia, so hopefully that'll spur more markets to add the game. However, why should the Jaguars have to depend on another player or team in order to get more market exposure?