Share All sharing options for: Courtney Greene: Key to the run D?

The common refrain from Jaguars fans when discussing the "do or die" Colts rematch is that "the Jaguars could've stopped the run if Courtney Greene wasn't hurt."  Obviously, one player does not make a defense on his own, but we've seen teams' defense be heavily influenced by the loss of one player before (see Sanders, Bob or Polamalu, Troy), albeit usually by much better players than Greene.  Still, I wanted to see if Courtney Greene was the key to the Jaguars' run defense in 2010.  I am doing the research for this post as I'm typing it to try to eliminate bias from seeing the results beforehand.  Going into my study, I thought that the Jaguars' run defense was better when Greene was in the starting lineup than it was when he did not play or barely played.  Read on to find out what really happened: 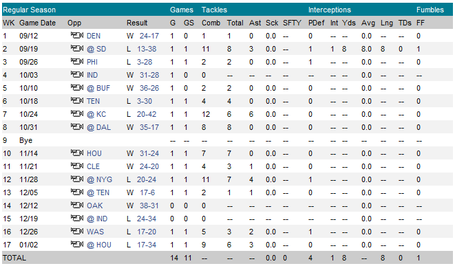 As you can see, Greene was not the starter or was inactive against Denver, Indianapolis both games, Buffalo, and Oakland.  Greene started all 11 other games.  However, he was injured on the fifth play from scrimmage in the second Tennessee game, so I will be counting that as a game in which Greene did not play for the purposes of this study.  The first thing to do is to look at the Jaguars' defensive statistics.

Overall, without Courtney Greene starting, the Jaguars gave up the following:

126 rushes, 620 yards, 4.9 yards per rush, 6 TD, 6 20+ yard rushes.  Given that Greene was not the starter for five games and missed the vast majority of a sixth, in six games this equates to a per-game average of:

In the games where Greene was the starter (minus the Tennessee game, as previously stated), the Jaguars' run defense allowed the following:

According to the stats, with Greene as a starting safety the Jaguars faced eight more rushes per game and allowed an additional 29.2 yards rushing per game.  These additional carries were at a clip of 3.7 yards per game, which is what lowered the Jaguars' overall yards per carry allowed to 4.6 with Greene in the game.  As compared to their season stats:

The end result:  With Courtney Greene in the lineup, the Jaguars faced a decent amount more rushes and their run defense slightly improved as a unit.  They gave up slightly more TD with Greene in the lineup but gave up slightly less 20+ yard rushes.  Even if you want to look at the second half of the season more closely than the first due to Greene's growth as a starter, the Jaguars still got destroyed on the ground by Houston, which kind of negates that point.  Overall, this study concludes that although Courtney Greene seems like a solid young player with good upside, whether or not he was in the lineup did not have a significant impact on the performance on the Jaguars' run defense.

What say you, Big Cat Country?