Share All sharing options for: JDR: Gabbert was checking into potential game-winning play

In Jack Del Rio's press conference today he talked about the play that really sealed the deal for the Jaguars, when Brad Meester snapped a ball past Blaine Gabbert as he was checking out of a play. According to Del Rio, Gabbert was taking advantage of a look the Bengals defense was showing and it could've resulted in a game-winning touchdown for the Jaguars.

"That was a good sign. To have him at the end make the right check, they're bringing all out zero, we got a chance to gouge them for a potential game-winner and he's making the right check and we just get a little antsy before it on the snap."

Here is a look at the Bengals defense just seconds before Meester's premature snap: 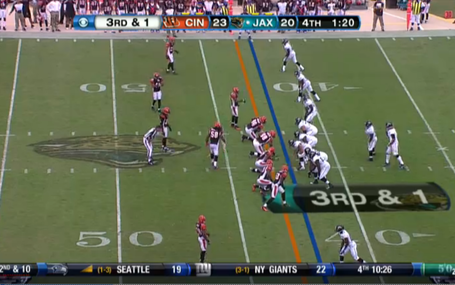 When Del Rio says they're bringing "all out zero," he means that the Bengals were looking to blitz and were going to use a "cover zero" defense. That means that there would be no safety over the top to help defend a deep pass. You can see in the picture that all 11 of the Bengals defenders are within six yards of the line of scrimmage.

This means that in all likelihood, the Jaguars would've been throwing a deep pass on 3rd & one. On the one hand, I'm excited that the Jaguars have a QB that recognizes situations such as these and makes changes to the correct play call, but on the other, I'm a little sick to know what the team could've taken advantage of.