"The one-eyed monster – it never lies." – Joe Namath, referring to his projector

In the "One-Eyed Monster" series, contributor Eric Stoner will post breakdowns with visual aides of certain plays and concepts being used by/against the Jaguars.

As years have gone by, football fans are becoming more and more familiar with the wide varieties of coverages and schemes that NFL defenses use - whether it be Cover 1 (Man Free), Cover 2, Cover 3, or Cover 4 (Quarters).

Combined coverages aren’t talked about as much. Due to the success of Tony Dungy’s Buccaneers, most fans know all about the "Tampa 2" - a Cover 3 defense run out of a Cover 2 shell, in which either the middle or weakside linebacker takes a deep drop to the middle of the field to cover the area between the two deep safeties.

With the re-birth of the 3-4 over the past decade, one of the more popular combined coverage schemes you’ll see around the league is "Cover 6." As you may have guessed, it’s name is derived from the two combined coverages it uses: Cover 2 and Cover 4 (4+2=6. Magic!).

Here’s a visual of the Cover 6 pre-snap: 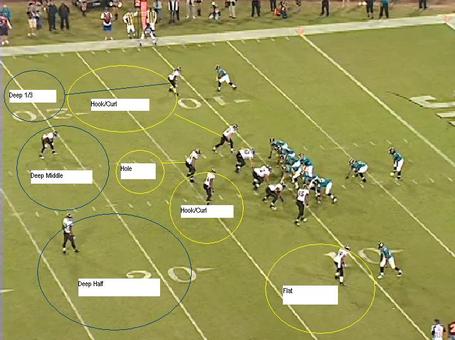 The safety to the field side will read the end man on the line of scrimmage and will fill hard downhill if he has a run read. If he reads pass, he will check for vertical releases by the inside receiver (the tight end in this formation). In the event that there is no vertically releasing inside receiver, he will help the field corner by bracketing the outside wide receiver.

While the Cover 6 has the advantages of Cover 2 and 4, it also carries the same disadvantages. The field side corner can get caught in single coverage, the flats to the field side can be exploited, and the Cover 2 "honey hole" between the boundary corner and safety exists.

Remembering those responsibilities, let’s look at this play in the 4th quarter, in which offensive coordinator Dirk Koetter called the perfect play to exploit Cover 6. 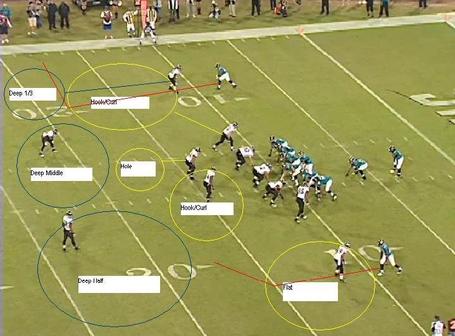 The Jaguars run a max protection play action pass with only two men running routes. Jason Hill runs a deep slant (breaking at 5-7 yards) on the backside and Mike Thomas runs a deep out. 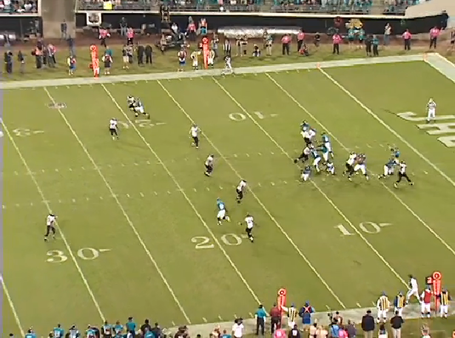 You can see how the play design turns the defenders’ responsibilities against them. Ed Reed (the field side safety) reads Marcedes Lewis at the snap of the ball. Because Lewis stays in to block, Reed has the freedom to bracket the Mike Thomas. Because Mike Thomas runs an out, however, it makes Reed vacate the middle of the field. Concurrently, the play action fake freezes the weakside hook/curl defender and prevents him from getting depth in his drop.

This is a throw that must be made with timing and anticipation and into a tight window. Gabbert releases the ball just before Hill crosses behind the weakside hook/curl defender so that the ball gets there just before Hill enters the "hole" defenders zone. 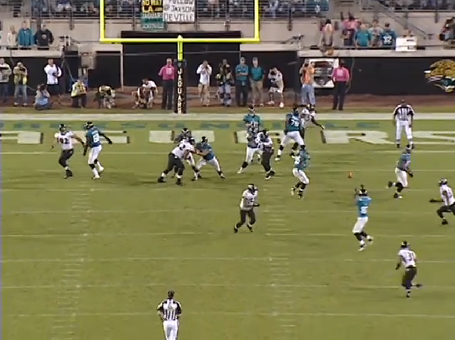 The final result is a 24 yard catch and run, allowing the Jaguars to pick up a first down and run valuable time off the clock.