In the aftermath of the Jaguars inability to move two yards into the endzone with the aid of a timeout and over 40 seconds to work with, there's been plenty of speculation as to who is to blame. Jack Del Rio for not calling a timeout after a one yard run to get to the one yard line, Dirk Koetter for not electing to run with Maurice Jones-Drew on the final play, Jason Hill for not catching the game winner that bounced off his chest and Blaine Gabbert for not winning the game on the final play.

Now, Del Rio is saying that Mike Thomas deserves to share some of the blame for the final play that was intended for Thomas, but fell incomplete:

"Mike's (Thomas) got to define that right there for Blaine, either pivot or continue crossing. He got kind of in between on it and Blaine delivered a ball that was, it just didn't hook up. We had a chance there to execute that play. We needed a more defined route and a better throw, and we didn't get that and so we didn't connect on that play."

After rewatching the play, here is what Del Rio means by "defining" the route. On the play, it looks like this was Mike Thomas's original route: 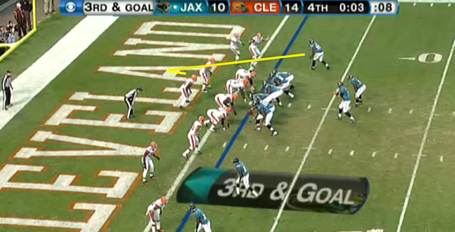 Thomas ran to the center of the 'A' in "CLEVELAND" and pivoted to face Gabbert. He was met almost immediately by Browns LB D'Qwell Jackson who turned to defend Thomas face-to-face. At this point, Thomas has to make a decision. He can:

a) Stay where he is and give Gabbert the option to throw over Jackson's head while he's not looking, or

b) Turn and run across the field, putting Jackson out of position, like so: 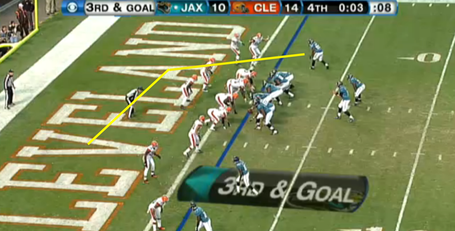 Thomas instead chose to shuffle sideways to the 'L' in "CLEVELAND." Gabbert released a pass that was behind Thomas and sailed over the 'A,' exactly where Thomas would have been if he had stayed where he originally set his feet at the end of his route. By saying he should "define his route," Del Rio is asking Thomas to make the intentions of his route clear and make a clear decision to stay where he is and wait for the pass or run across the field clearly.

Ok I promise this is the last article you'll read from me regarding that final drive against the Browns. Time for me to get over it.