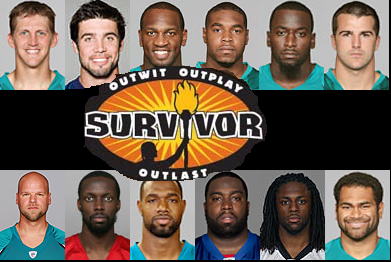 Welcome to the first episode of Jacksonville Jaguars Free Agent Survivor. For the next while, we'll be following the story of twelve Jacksonville Jaguars slated to be potential free agents. We're going to assume there will be free agency, because if there isn't I'm wasting a lot of time and that would upset me greatly. Now, lets get to our regularly scheduled program.

As we get nestled into our chairs to watch Survivor: Jaguars Free Agents we get to meet all of the contestents. The first person on the island is Pro Bowl tight end Marcedes Lewis. He's a bit shocked, as he was expecting a big-time contract but was tricked into making his way to the island. He's shortly joined by a hobbled Luke McCown, the quarterback who tore his ACL in mop up duty back in Week 2 against the Chargers. McCown and Lewis chat for a bit. Lewis gets annoyed with McCown talking about how awesome he played in the pre-season, but Lewis doesn't know what he's talking about. He's pretty sure that was Luke McGowen, who's mysteriously gone missing.

In a small boat, wide receivers Jason Hill and Mike Sims-Walker make their way to the island. It took a little while to get there because Sims-Walker dropped one of the paddles. Linebackers Justin Durant, Freddy Keiaho, and Kirk Morrison get to the island and are greeted by their offensive counterparts.

Trent Edward and offensive tackle Guy Whimpershow up shortly afterwards, followed up by safety Sean Considine. Considine almost didn't make the trip, as he was late getting to his boat. The only thing in his way was Guy Whimper, but he was able to make it past him.

The last person to arrive to the island was quarterback Todd Bouman, who showed up via airboat. He said he was a last minute addition to the program, because they needed to round out the show. He was harvesting some soybeans when his wife got him on the CB radio from the house.

The group is split up into teams, offensive and defensive. The defensive guys are a little perturbed that their outnumbered 7 to 4. Morrison is quick to remind his teammates there's nothing to worry about. "Who's going to throw the ball Edwards? McCown? Bouman? We only need to worry about McGowen, and he's not here."

Everyone sits in wait for their instructions as to what's going on on the island. They're waiting on the last contestant, cornerback David Jones. Little do they know however, David Jones won't be making the trip. His boat sailed right past him.

The first free agent eliminated off the island is David Jones by default, who statistically was worse in coverage than a hole zone coverage.