Lenny from the Simpsons is a Jacksonville Jaguars fan

Share All sharing options for: Lenny from the Simpsons is a Jacksonville Jaguars fan 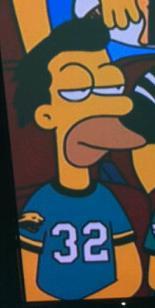 According to this 2011 Super Bowl Commercial, Lenford "Lenny" Leonard from the Simpsons is a Jacksonville Jaguars fan. Lenny is often seen frequenting Moe's Bar and works with Homer Simpson at the nuclear plant. Lenny is a buddhist who is a war hero and a three-time juror. He's also a member of Springfield's secrect Stonecutter society. Lenny is geniunely apathetic towards most fans, but he's clearly passionate about his Jaguars. Here is the list of who's fans of the other teams. Only the Houston Texans have no fan.

"I can't believe I spent my Saturday picking up garbage.I mean, half those bottles weren't even mine."
―Lenny