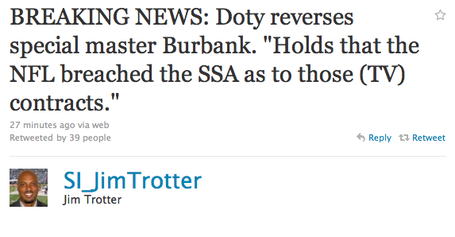 According to Jim Trotter of Sports Illustrated, Judge Doty has overturned the ruling by special master Burbank on the NF TV contract ruling, which would have allowed the NFL owners to pocket the TV deal money even in the event of a lockout. It means the NFL will not have access to around $4 billion in money. As of today, the league does not have access to that money. It's a big deal so some owners who are in debt because of expenses such as stadiums, etc. Mike Florio of ProFootballTalk.com also notes that, "Doty has not yet ruled the money won't be paid to the league. He could decide to just give the union 59.6 percent of it."

Some feel this is the kind of drastic turn that could actually force a deal to be done by the deadline, as it severely changes the landscape of power in negotiations.