New York Jets quarterback Tim Tebow reportedly wants out of New York, so guess which team has already been linked to him?

The New York Jets announced on Tuesday that Mark Sanchez was no longer going to be the team's starting quarterback and that they were moving on with Greg McElroy. This came as a surprise to some, most notably the Tim Tebow camp. After learning the news, Tebow reportedly plans to request a trade or his release from the Jets in the offseason.

This automatically means that massive speculation will now focus on Tebow heading to the Jacksonville Jaguars, as it always does. ESPN's Adam Schefter called the Jaguars a "viable landing spot" on NFL Live on Wednesday afternoon. It's the easy dot to connect because the Jaguars were involved in trying to trade for him last season, but Tebow chose to go to the Jets because the Jaguars reportedly told Tebow he would not play quarterback in Jacksonville.

Coming in the 2012 offseason, we're going to hear the same song and dance again. We're going to hear about how Tebow is from Jacksonville (...kinda), how Tebow is an icon here, how he would sell tickets (hah) and how Jaguars owner Shad Khan "wanted" Tebow in Jacksonville. The validity of all of this still remains to be seen, especially since if Khan really wanted Tebow he could have just upped the Jaguars offer, but there might be a way Tebow in Jacksonville can work, for everyone.

The Jaguars shouldn't trade for Tim Tebow first of all, because it's unnecessary. It's likely the Jets are going to release him, because it's going to be a massive distraction if he remains on the roster and does not play. Not only are the Jets likely to release Tebow, but the demand for him isn't likely going to be high as it wasn't high last season when the Denver Broncos tried to move him.

One of the biggest problems with having Tebow on your roster however is that he's almost toxic at the quarterback position. He's going to polarize fans between people who think he's amazing no matter what and the people who just don't think he's a worthwhile NFL quarterback. If you bring Tebow to a team without an established quarterback, like the Jaguars, you're inviting a circus into your midst and that's something that can destroy a team from the inside. It happened on both the Broncos and the Jets, as soon as the incumbent struggles, it begins. The cries for Tebow start and don't ever stop until he plays. Then if he plays and fails, it's because of something the team did wrong moreso than Tebow just isn't a viable NFL quarterback. 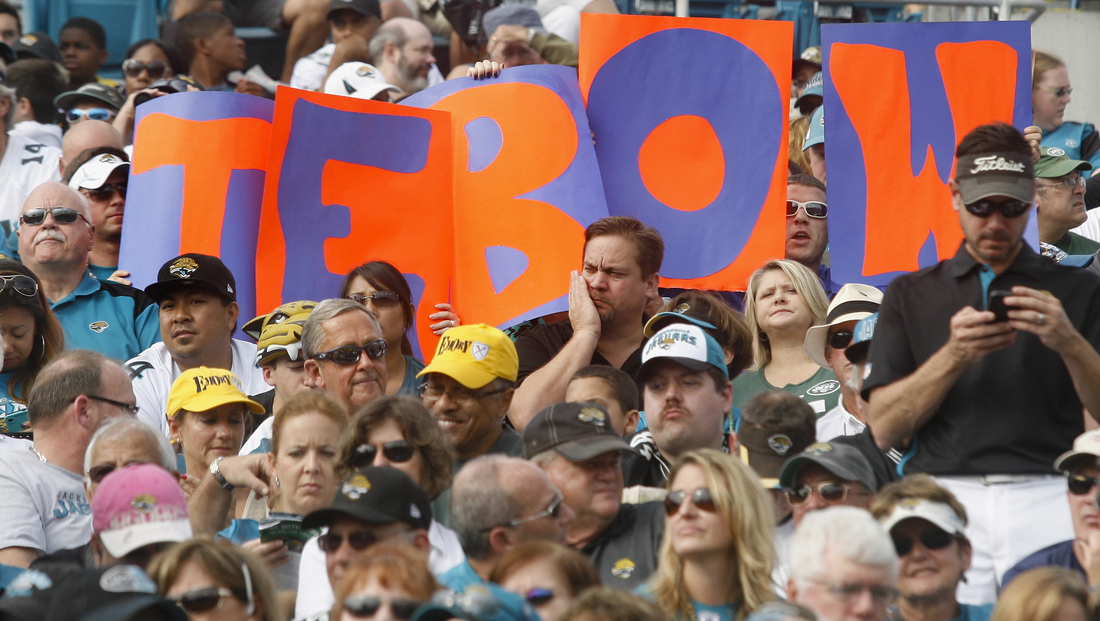 If you're a team who drafts a quarterback in the first round, you don't want Tebow as a quarterback on your roster. As soon as your rookie struggles there will be cries for Tebow. If you're a team with an established starter who's in a slump, like say Philip Rivers, you don't want Tebow on your roster. As soon as Rivers throws a couple of interceptions, the cries start.

The only way Tebow works on your roster as a quarterback is if you have a Tom Brady, Aaron Rodgers, or Drew Brees on your roster. Not even the most die hard illogical Tebow supporter will begin the cries for those few. The Jaguars, and most NFL teams, aren't in that situation though. They fall into the other categories and it's something most teams don't want to have to deal with.

The Jaguars are playing in London the next four years and Khan will want to make some kind of splash and get attention for it. Doing it with Tim Tebow the non-quarterback can accomplish that without the chance of it blowing up in your face with Tebow at the quarterback position, which it will likely do.

You please the sect of people who just want him on the football team no matter what, however illogical that is. You also please the people who don't want Tebow as the team's quarterback. I believe most people, even myself, could handle the Tebow hooplah if he wasn't at the most important position on the team.

Personally, I don't think any of this is going to happen. In order for it to happen, Khan would have to hire a general manager and a coach who would be on board with bringing on Tebow and he shouldn't limit his search by doing so.

What it really boils down to however is I don't believe Tebow is willing to give up being an NFL quarterback yet, and ultimately that's going to stunt his possible NFL career.