Guest Post: Do the Jaguars Know Something About Punters That We Don’t?

Share All sharing options for: Guest Post: Do the Jaguars Know Something About Punters That We Don’t?

Do the Jags Know Something About Punters That We Don’t? Hint: No.

Taking a punter in the third round of the NFL draft is something of a self-fulfilling prophecy. Punting isn’t something you plan to do in a football game. It’s something that happens when things don’t go as you planned.

When the Jaguars took Bryan Anger with the 70th overall pick, they were missing a chance to fortify their team at another position, and they were taking a player that only sees the field less than 5 times per game (on average). When they made that pick, they were probably increasing the odds that Anger would actually end up on the field a lot. That’s why I say that taking a punter is something of a self-fulfilling prophecy. 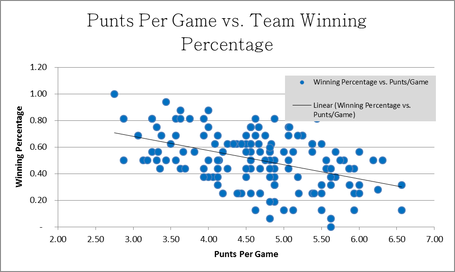 The act of punting isn’t actually causing all of the losing. Punting is partially a byproduct of being a bad team. But as the football analytics community has argued again and again and again, punting also probably does cause some of the losing. Punting is a suboptimal play because it’s a voluntary turnover. There are some instances where NFL teams punt because they’re backed up and have no other choice, and there are some instances where they punt for no good reason.

The problem with the low involvement of punters in a football game (remember that teams punt less than 5 times per game on average) is that the difference between a good punter and a bad punter isn’t magnified at all. The best punter in the league might average 50 yards per punt. An average punter might average 45 yards per punt. But those five yards in field position aren’t that meaningful in terms of their impact to the game because no matter how far the punter kicks it, the other team still has a 1st down. Consider the following graph that shows the average point expectation that a team might have depending on how far from their own end zone they start a drive. 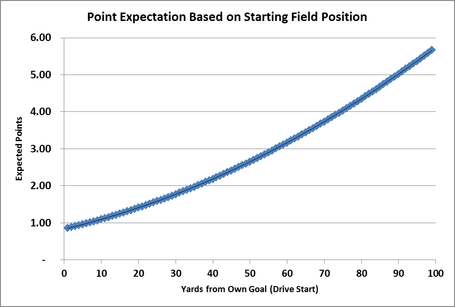 A difference of 5 yards in field position only has a point expectation difference of 0.2 points. A team that starts a drive at its own 36 yard line will score about 2 points on average (all drives averaged out). Backing them up to their own 31 yard line reduces that expectation to about 1.8 points per possession.

If you then multiply that difference of 0.2 points by 4.7 punts per game, a really good punter might be worth almost 1 point per game more when compared against an average punter. To put that one point per game in perspective, Advanced NFL Stats says that there are 50 wide receivers that help their team more than 1 point per game. So even if you’re guaranteed to get the league’s best punter, the point differential impact won’t be very much.

But there’s another problem. Drafting a punter in the third round doesn’t guarantee that you get the league’s best punter. In fact, based on the last 5 NFL seasons, there hasn’t been any correlation between a punter’s draft position and their punting average. Drafting a punter early doesn’t guarantee that you’ll get a good one. Remember that 1 point above average difference between the best punter and an average punter? Because you don’t know what kind of punter you’re getting, you have to zero out that point. You can’t consider it because you don’t know if you’ll actually get it.

There’s one more problem that has to do with the business of football. Drafting a position player at the 70th overall draft slot carries benefits beyond the player you get. It has salary cap benefits. Consider that players like Chicago’s Lance Briggs and San Francisco’s Frank Gore came out of the same general area of the draft that the Jags used to select Bryan Anger. But consider that linebackers and running backs tend to make more money than punters. That means that if the Jags got lucky and turned their 70th pick into a very good player at a non-punting position, they are going to have substantial salary cap savings compared to the savings they’ll get from drafting a good punter.

To illustrate this point, consider that when the Bears drafted Lance Briggs, they paid him about $500,000 per year during his rookie contract. Today he makes closer to $6 million/year. When San Francisco took Frank Gore, he made about $500,000 per year over his rookie deal. He also makes about $6 million today. Those teams were getting extreme discounts when the players were on their rookie deals.

But even the best punter in the league only makes about $4 million per season, and a lot of them make less than $2 million per season. In fact, about half of the league’s punters make less than $1 million. If the Jags "hit" on their 70th draft pick, the upside in terms of salary cap savings isn’t anywhere near the amount it would be if they were to hit on a player at another position.

Punting doesn’t cause all losing, but punting and losing go hand in hand.

If you’re a Jags fan, watching the team take a punter should have looked something like watching someone put hurricane shutters on their house.

Follow-up: FantasyDouche has posted a follow-up article in response to you guys' comments with some more interesting data. See the article here.