The Jacksonville Jaguars scored the go-ahead touchdown against the Vikings on Sunday on a play commonly referred to as "four verts". Big Cat Country breaks down the play and why it worked.

Share All sharing options for: Jaguars Film Room: Four Verts And You

With the availability of coaches film now via NFL Game Rewind, we can get a better look at some plays in Jacksonville Jaguars games now and figure out why they did or did not work. In the first installment of "Jaguars Film Room" we're going to look at what looked like it was going to be the game winning play against the Minnesota Vikings on Sunday. It was a 39-yard touchdown pass from Blaine Gabbert to Cecil Shorts III that was a nice throw, but an even better adjustment and catch by the wide receiver.

The concept the Jaguars ran on the play is commonly referred to as "four verts" and is something we have noted in the past that will be a big part of the Jaguars offense under Mike Mularkey and Bob Bratkowski. The play, as it's name describes, has four receivers running vertical patterns and getting down the field. 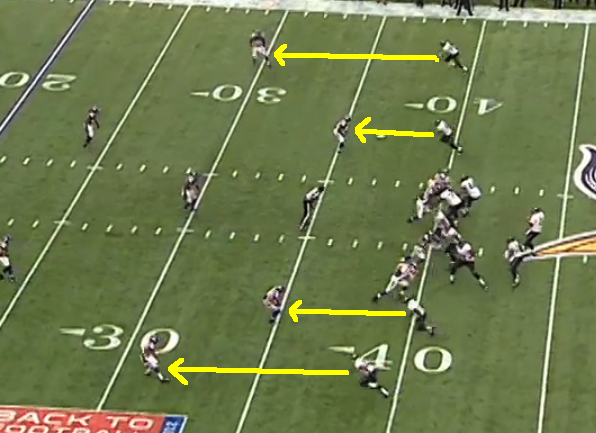 In comes four verts, as you can see in the snapshot of the play as the ball is hiked. The Vikings are playing with two-deep safeties and playing off coverage with their corners. With four verts, you put the pressure on the safeties of the defense, forcing them to leave a receiver in single coverage, which is exactly what the quarterback wants. You're trying to quickly identify the player who's going to wind up in single coverage, but you can also manipulate the play to figure that out fast, which is exactly what Gabbert does. 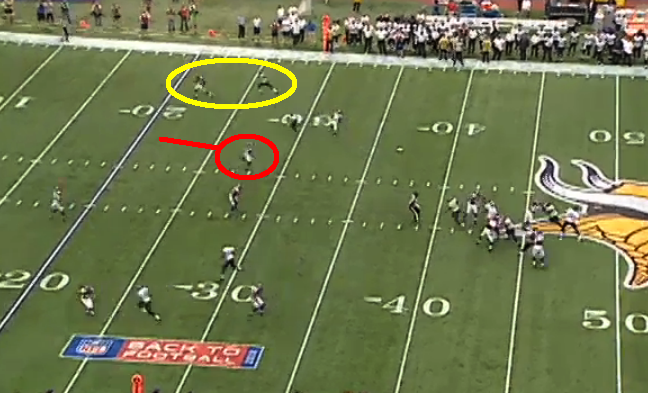 The pump fake brings the safety down.

As you can see in this next snapshot, Gabbert pump fakes the safety on the right side of the field, drawing him down deeper in the seam in coverage to jump what he thinks will be a pass to the slot receiver, Mike Thomas. With the safety being brought down, it guarantees the outside receiver Shorts with single coverage, giving Gabbert what he wanted.

The result of the play is a 39-yard touchdown pass that put the Jaguars ahead with just 20 seconds left in the game, but as we all know the Jaguars still lost in overtime.

"The thing you learn very quickly in the NFL is the game's never over until it's over," Gabbert said after the game on Sunday. "You have to fight through the emotional highs and the emotional lows, week in and week out. We saw that today."