The Jacksonville Jaguars defense had some breakdowns against the Minnesota Vikings. We hit the Jaguars Film Room to look at what when wrong.

Share All sharing options for: Jaguars Film Room: Breaking Down The Defense

Announcers and analysts often talk about coaches "scripting" out their first 10-15 plays, but fail to elaborate why. It has everything to do with "tendencies" - distinct playcalling or decision-making patterns that can be tracked through detailed playcharting. It's how you figure out whether a team will run or pass out of a certain formation, what their go-to play is on 3rd and medium, or what protection the offense is likely to use with a particular personnel grouping so you can get a blitz with a free rusher. Conversely, offenses can pick up on what fronts, run fits, sub-packages, and coverages a defense will use against certain formations and personnel groupings. Figuring out these tendencies is what coaches spend all their time breaking down film and charting plays for.

Back to scripting plays....it serves a few different purposes. It helps negate your own team's tendencies, because the playcalling pre-meditated and not based on down and distance or situation (although situation CAN cause you to go off the script). That's not to say that the scripted plays are chosen without purpose. The plays themselves are almost inconsequential. You're really seeing how the defense lines up and reacts to your formations, personnel groupings, motions, etc. You might not get through all the plays on the script, but you want to show enough to set things up for later in the game, or to alter your own game plan.

Injuries have forced backups into starting roles at both cornerback and outside linebacker spots. We saw the Jaguars go through a similar situation in 2011, when both Derek Cox and Rashean Mathis were lost with season-ending injuries. While the Jaguars defense isn't necessarily exotic, healthy defensive starters allows more flexibility - particularly in auto-checking coverages and fronts vs certain personnel groups and formations the offense presents. Against the Vikings, Jacksonville stayed almost exclusively in their 4-3 Over front (<--this will be really helpful background reading if you're not overly familiar with the modern 4-3), running Cover 2 as their base coverage. It's the same strategy the team used last year when dealing with a host of injuries on defense. (I should also note that when I say "Cover 2," I am referring to both the base coverage, as well as the Tampa Two and Cover 2 Trap variants as an all-encompassing term. Cover 2 Trap (Also referred to as Cover 2 Gold, or "Cover 2 Sink" in EA Sports culture) is probably their favorite - the corners play soft and don't funnel the receivers inside, gaining more depth than usual in order to protect the safety and not get "hi/low'd" on corner route combos like Smash.)

I wasn't in the Vikings' meeting room last week, but I've got a feeling that they scripted their plays with the intention of opening the game with formations to see if they could get the Jaguars out of their 4-3 Over, Cover 2 look: 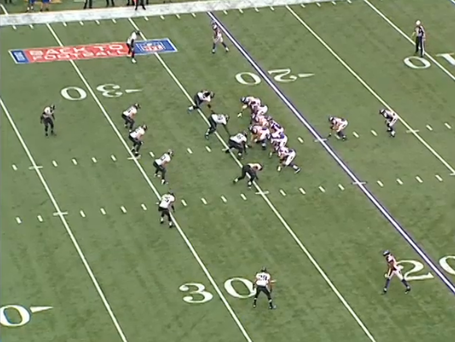 (Vikings open with 21 personnel in the I formation. The fullback motions next to the left tackle pre-snap, making a balanced, singleback look. The Jaguars line up in the 4-3 Over and run Cover 2 Trap.)

Oftentimes vs two-back sets, 4-3 teams will auto-check to a 4-3 Under front to reduce the number of uncovered gaps the defense can attack in the run game - the Over has 3, the Under has 2. Offenses love to attack those 3 uncovered gaps in the run game, especially vs Cover 2 where the safety has deep pass responsibility and cannot enter the run fit until it's clear that the offense isn't running play-action or some kind of toss pass or reverse pass. Motioning to double tight is significant as well, and it's more apparent why in the Vikings' second play: 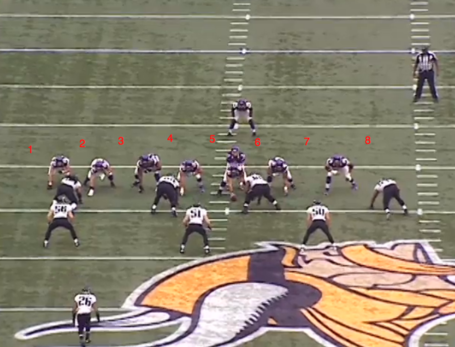 (12 personnel here, with both TEs are aligned to the strong side. Again, the Jaguars stay in their 4-3 Over, Cover 2.)

Like when the Vikings motioned out of the I formation and into a balanced two tight end set on the 1st play, the Vikings have created 8 gaps for the defense to defend. Jacksonville only has 7 players in it's front. More importantly, they only have 4 defenders to account for 5 gaps on the strongside. ALL DEFENSES (4-3, 3-4, "one-gap," "two-gap," whatever) require players in the front seven to be responsible for two gaps when if you're going to keep both safeties back in deep coverage. In Cover 2 out of the Over, the responsibility to two-gap falls on the three linebackers. 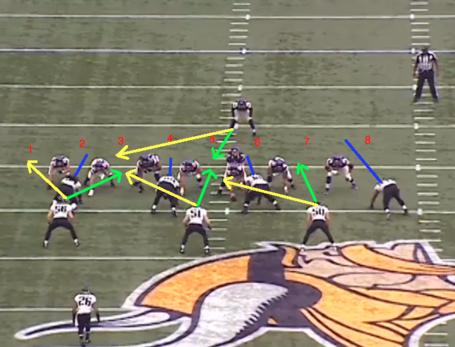 .(Gap responsibilities for the front 7 out of Cover 2. The linebackers two-gap the uncovered bubbles in the front and will fit the appropriate gaps based on the runningback's flow.)

Next, the Vikings came out in a trips bunch set. Again, this is another example (in my opinion) of the Vikings testing to see if they could get the Jaguars to change or auto-check out of Cover 2. Trips formations (especially out of bunch) force a lot of stress on Cover 2 defenses. It's difficult to jam and funnel the receivers together to protect the safeties from vertical threats, and the offense has an easy numerical advantage if they flood the underneath zone to the trips side (or run a screen) with the safety staying deep. 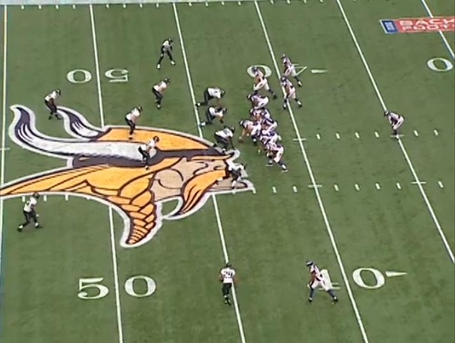 (Vikings' Trips Bunch. Jaguars, once again, stay in 4-3 Over Cover 2. Minnesota runs an end around to Harvin.)

So what did Minnesota do with the information they gleaned from the first drive?

They started giving the Jaguars heavy doses of the I formation to attack the three uncovered gaps in the Jaguars' 4-3 Over front. And they featured the Lead Draw as a running play for the rest of the game - a very effective play vs 4-3 Over and Cover 2 in particular. 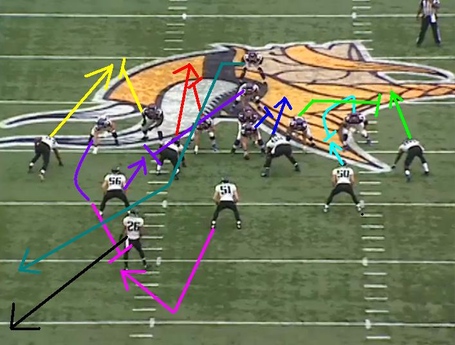 The offensive linemen all pass set - on the strong side, they invite their defender outside and try to push them upfield. The weakside swaps, with the tackle pass setting and then releasing upfield to the weakside linebacker. The weakside guard wraps around to the defensive end and takes him upfield. If the defensive line cheats and doesn't check the backfield action, they're liable to get run upfield and out of the play, opening up huge rushing lanes.

The tight end arc releases with his eyes on the strongside linebacker, blocking the backer if he drops into coverage. If the strongside backer fills hard inside vs run, the tight end will let him go and will continue to the middle linebacker, who will open up towards the tight end while making his deep pass drop. The quarterback drops back and sells pass before turning at the top of his drop to hand it to the runningback. The fullback leads the runningback through the hole (hence, LEAD draw), and will pick up either the middle or strongside linebacker - whichever one shows up and fills at the point of attack first.

As you can see, there are a lot of potential problems for defending the draw out of Cover 2 in the Over, especially when the defensive line get baited too far upfield, widening those two uncovered gaps to the strongside and giving the runningback lots of space to press vertically and then cut outside. That puts a lot of stress on the linebackers - remember, they're the two-gappers and have to adjust which gap they fill on the fly, depending on the back's path. The Vikings took advantage of this, hammering the Jaguars defense with Lead Draw. They opened almost every offensive series with it from the second drive on.

(The Vikings' first play from scrimmage in overtime. With no safety in the box, the there are seven blockers to account for all seven box defenders.)

That's not to say that the Lead Draw is impossible to defend out of the 4-3 Over, it just takes good eye discipline by the box players. Defensive linemen need to shoot their eyes to the backfield to confirm the initial read the offensive lineman gives and determine where the ball is going, so he can either squeeze and compress his gap or redirect down the line of scrimmage into pursuit.

(Without a numbers advantage, the onus is on the defensive line to choke the offensive linemen down and compress the gaps. Defense is all about constricting space.)

While the Jaguars played a few different coverages and substitution packages in obvious passing situations, Minnesota was happy to stay with base personnel, as it kept the Jaguars predictable. In overtime, the Vikings started their drive with a Lead Draw, getting 9 yards. A few plays (and another 20 yard tackle-breaking run by Peterson) later, the Vikings had a 1st and 10 on their own 42. They were almost in field goal range and looked to take a shot. Knowing the Jaguars would likely a Cover 2 variant on 1st down, the Vikings dialed up a great Cover 2 beater concept - Inverted Smash, also referred to as "China." It features the same Hi/Low stretch on the Cover 2 corner that Smash does, except the outside wide receiver runs the corner route and the Low stretch comes from a flat or shoot route run by an inside receiver, in this case the running back. 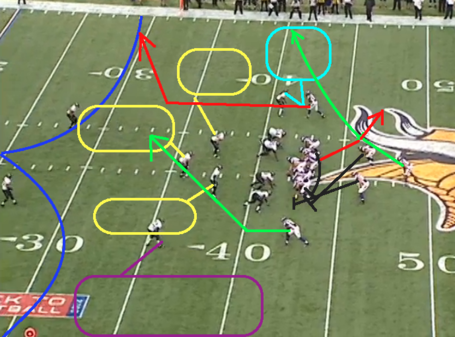 (The corner route hits right in the "honey hole.")

(The play got Minnesota into range to kick the eventual game-wnning field goal.)

Now, the point of this article isn't to say that the Jaguars' defensive coaches are predictable, or that their schemes are wholly to blame. From a pure execution standpoint, the tackling was incredibly sloppy, and you can't play bend-but-don't-break defense (or any kind, really) when you're tackling poorly. While the Jaguars will never be confused with, say, the Jets from a schematic standpoint, we saw the team play way more single-high, press-man coverage and get more aggressive with their front seven when they had a healthy crew on defense last year. The coaching staff all but said they're making due with what they have at the corner spot right now, and that the backups are only comfortable running certain coverages. Until Cox and Mathis are all the way back, expect more of the same.

h/t to Alen Dumonjic and Gerald Alexander for scheme help

Evolution of the 4-3 Front and The 4-3 Front, Continued via Jene Bramel at NYT's 5th Down