After grumpyapp led the Big Cat Country field in the first ever week of SB Nation's Pick6 game, it was Sexonville Shaguars that came away with the BCC crown for Week 2. His 99.2 points, that featured 49 points from the combination of C.J. Spiller and Danny Amendola, is also the most put up by a BCC player this season, narrowly edging grumpyapp's 98.3 score from Week 1. 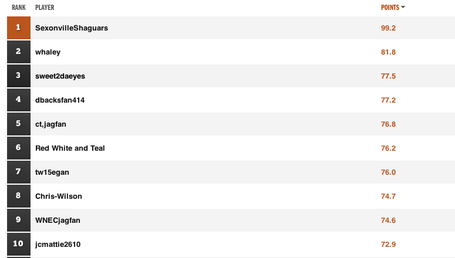 The BCC editors didn't fare as well in Week 2 as I earned the No. 67 spot, just 0.1 behind Alfie, who finished in the No. 65 spot. The best score in the SB Nation network again came from Buffalo Rumblings, as SB Nation's Buffalo Bills blog was well-represented with the winning six player combination for the second week in a row.

Picks for Week 3 of the free SB Nation network game are due before kickoff of tonight's game between the Giants and Panthers.