See who earned the top spot from BCC in Week 3 of the Pick6 game and be sure to make your picks for Week 4.

For the first time the top spot on the BCC leaderboard was held by one of the site contributors. After grumpapp and SexonvilleShaguars won the first two weeks, it was Jpon taking the BCC crown for Week 3 by becoming the first from the site to break the 100 point mark.

Jon's top point-getter was Giants running back Andre Brown who finished with 25.0 points at a price of just $0.50. With the combination of Andrew Luck and Calvin Johnson providing another 46.9 combined points, Jon had a balanced team that all chipped in to his winning total. 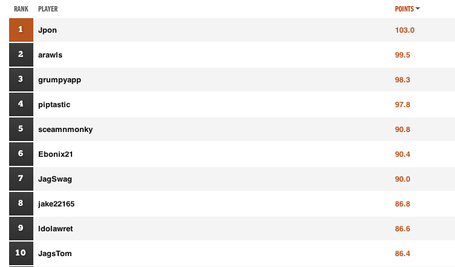 Unfortunately, Jon finished just under 10 points behind SUGMG4 of Bleeding Green Nation for the overall Pick6 title for Week 3, instead finishing No. 22 overall.

Picks for Week 3 of the free SB Nation network game are due before kickoff of the Thursday night game between the Browns and Ravens.