Jaguars vs. Bengals: Marcedes Lewis' role should increase on offense

Jacksonville Jaguars tight end Marcedes Lewis looked like his 2010 Pro Bowl form in Week 1, but since then hasn't been involved in the offense. That could change Sunday.

Share All sharing options for: Jaguars vs. Bengals: Marcedes Lewis' role should increase on offense

Marcedes Lewis had five receptions for 52 yards and a touchdown in Week 1 against the Minnesota Vikings. Lewis had the classic leaping touchdown in the back of the endzone, utilizing his gigantic frame and long arms as we saw him do during his 2010 Pro Bowl campaign, as season in which he caught 10 touchdowns.

Lewis most impressive play in Week 1 however was an 18-yard catch and run, where quarterback Blaine Gabbert hit Lewis in stride and allowed him to pick up about 10 more yards on the reception.

Since that game however, Lewis' role in the offense has been virtually nonexistent, having just one reception for eight yards in the past two games. The lack of production isn't of Lewis' doing however, it's due mostly to the injuries on the offensive line and the coaching staff opting to keep Lewis in to help in pass protection.

"Like you saw in the first game, when you can get him rolling in the pass game, get the ball in his hands he has the ability to make plays in the field," Gabbert told reporters on Wednesday about the possibility of getting Lewis more involved, now that the offensive line is getting healthier.

"He’s six-foot-seven, he’s a match up nightmare for linebackers," Gabbert said. "If they want to go to a set defense and have a corner come in and play the slot over him it always benefits us." 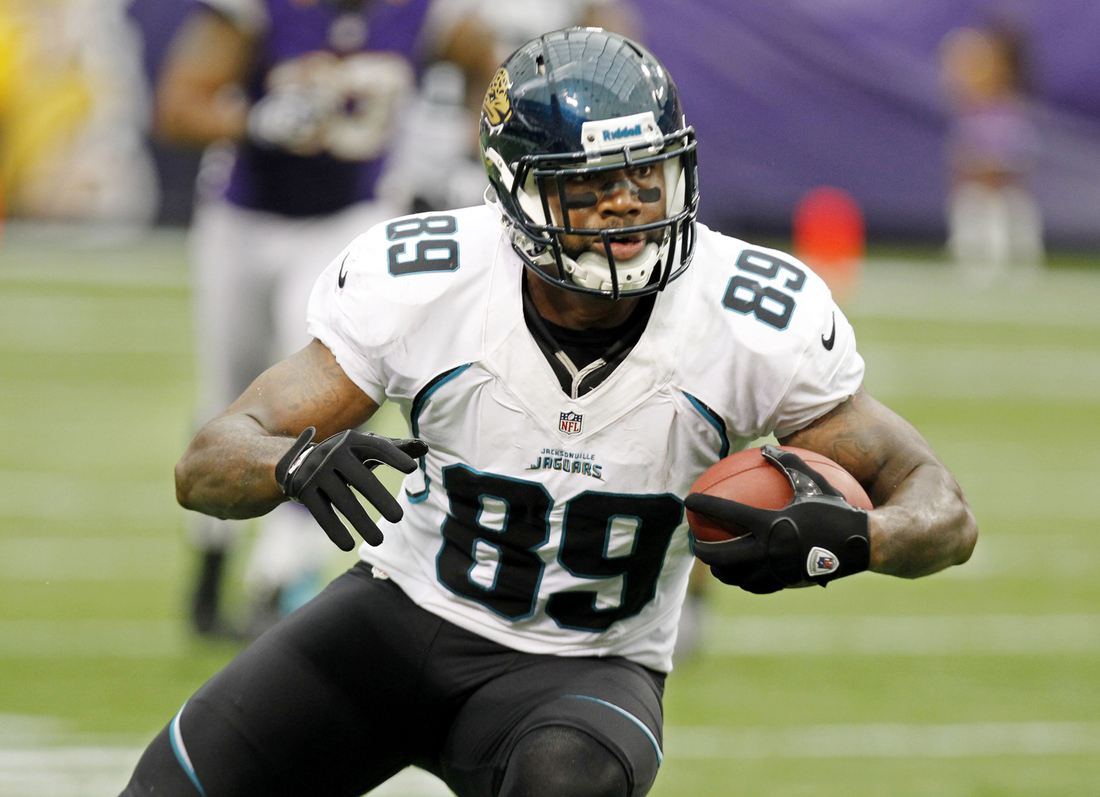 Lewis is coming off a disappointing 2011 season, in which he struggled to catch the football and dealt with some personal issues off the field. All of that is behind Lewis now and he's coming off a training camp where he looked like his old form and certainly showed it in Week 1. Lewis has been thrown to six times this season and caught every single pass throw his direction.

"I think it will definitely expand," Jaguars head coach Mike Mularkey said about Lewis' role in the passing game. "He has been very patient and very good about his role and helping with what he’s done in the protection game. I think too, when we get down in the red zone we’ve got to get down more in the red zone, and I think that will expand his role as well in the passing game."

If Lewis can become a threat like he was in the 2010 season, it should ease some of the coverage on the outside receivers. The Jaguars have struggled to work the middle of the field the past two weeks of the season, part of which is protection and part of which is scheme, but having the ability for your big tight end to go down the seam once again can be a big asset in attacking the middle of the field.