The Jaguars current defensive scheme is a variant of the 4-3 defense.

Currently the Jacksonville Jaguars run a 4-3 defense that uses a lot of zone coverage concepts. There is a possibility the team changes to a 3-4 defense, depending on the coaching staff. I explained the nuances of a 3-4 defense here earlier, so I wanted to make sure to explain the different looks in a 4-3 defense, especially the look the Jaguars have employed the past few seasons.

Once again for reference is the defensive line technique numbering chart:

As you can see, the numbering system starts with the 0-technique, which lines up directly over the nose of the center on the offensive line. From there, the system expands all the way to the 5-technique which plays the outside shoulder of the offensive tackle.

Here is what the 4-3 "stack" generally will look like: 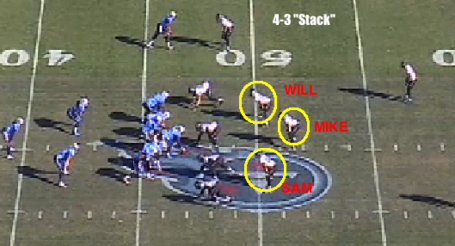 The Jaguars defensive line is lined up in an odd front in this shot, but you get the picture. Each linebacker is between a gap on the defensive line.

Now, there are different variations of the 4-3 defense, depending on how a defense shades. A team like the Jaguars commonly plays what's called a 4-3 "under" defense with a Cover-2 shell in the back end.

Here is what the 4-3 "under" generally will look like: 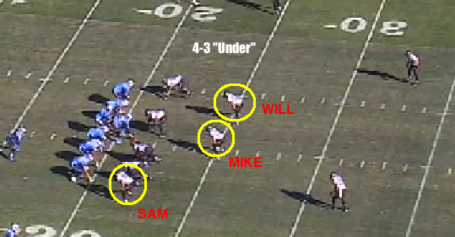