Share All sharing options for: Gus Bradley's 4-3 defense and the LEO position

When Gus Bradley was hired by the Jacksonville Jaguars earlier this week, one of the first major talking points was what type of defensive scheme Bradley would choose to install. What makes this a particularly difficult question to answer is that Bradley hasn't really been consistent year-to-year in terms of what scheme he's employed.

Much like Pete Carroll, Gus Bradley's first major coaching gig game as an understudy to Monte Kiffin. Kiffin's impact on modern defenses has been discussed ad nauseum, but his major gift to the football world was figuring out a way to combine two unrelated defensive fronts into a coherent defensive system that could be utilized with equal effectiveness against both two-back and one-back offenses.

So Carroll and Bradley are firmly rooted in the Kiffin 4-3 style coaching tree. Yet, the Seattle defense bares little resemblance to its Tampa Bay forerunners - notably in that mostly play single-high coverages (very little Cover 2) and base with three massive interior linemen. In very simple terms, the defense is less concerned with pure speed and penetration, and more concerned with building a wall from sideline-to-sideline.

FieldGulls' Thomas Beeker has an outstanding write-up from this time last year, when the Seahawks' defense was still under construction and the scheme was still getting fleshed out.

"The Seahawks defense is certainly unusual in its front seven, no doubt about that one. Is it "a 4-3 defense with 3-4 elements" ... well ... What does that even mean? Descriptions like that tend to cause more confusion than they clarify anything. Does that mean our front seven is schematically close to a traditional 3-4? It really isn't. That we have the personnel to run a 3-4? For the most part, we really don't. The basic thinking here stems from the fact that we have three unusually big bodies on the front line, especially Red Bryant, a prototypical 3-4 end. But we play a fairly straight-up, although not very traditional, 4-3.

Right now, the Seahawks run a primarily one-gap-and-hold 4-3. Usually, when you hear "one-gap" 4-3, you should think of Kiffin/Tampa 2 or Phillips 3-4 style, attacking relentlessly through single gaps to overwhelm the opposing offensive line. But that's not the case for us. One-gap-and-hold sees linemen take on single gaps (and often two gaps), but not to penetrate, rather to outmuscle the offensive line and choke out any running attempts. Our defensive linemen play primarily one-gap, with only Red Bryant two-gapping every down, while Mebane and Branch play one-gap in "base" but frequently switch up so either one (but mostly Mebane) plays two gaps, depending on down and distance. This gap variation is just the start of it. The Seahawks very frequently switch personnel, lineups and gap assignments, even if they do primarily stay in a 4-3."

So how did two Monte Kiffin understudies end up running an even front defense with odd front principles? It goes back to Carroll's time in the 90s on George Seifert's 49ers staff. As Carroll explained to Jerry Brewer of the Seattle Times:

"We mixed the concepts of one-gap football and two-gap football in a very unique way in San Francisco," Carroll said. "And we played great defense. To me, that was the ultimate package, and we've been able to get back to it now. It's taken us three years, really, to get to the point where we can incorporate the ideas. So, we're doing all of the things that we liked there. I thought it was the most comprehensive package of defense that I've been around. I was not able to do that at SC. I was the defensive coordinator and putting the whole thing together at SC, but our guys just couldn't handle it. It was just too much stuff, and it was too much for the coaches. So we did variations of stuff. It worked out great, but in college, we weren't capable of doing all of that. Guys couldn't learn and couldn't teach it the way we needed to. But it made sense to Gus and all of our coaches -- the background and the principles of things -- and then we've melded it together and ended up with a pretty diverse package of defense."

The most glamorous player in Carroll's defense is the Leo - the weakside edge player. While the 49er defense Carroll coached for in the 90s based out of a 3-4 defense, one of their favorite variations was the "Elephant" set. 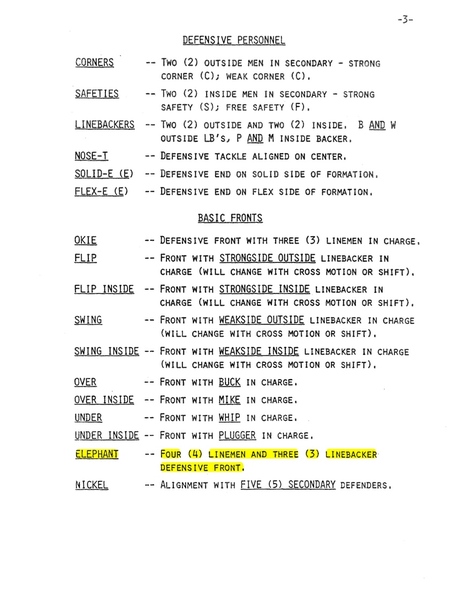 The Elephant front turned into it's own position, with Carroll eventually changing the name to "Leo." The Leo isn't particularly unique in and of itself. Most defenses have some kind of unique name for their weakside edge player (Buck/Whip/Jack), but Carroll plays him in a particularly loose alignment, and he's the one player along the front who isn't concerned with getting one-yard upfield and anchoring in this defense. He can line up standing up or with his hand in the ground, and sole focus is to be the primary pass rusher and wreak havoc in the backfield. Ultimately, what makes Carroll's defense unique is how the huge gap between the Leo and the next defensive lineman along the scrimmage is defended.

Like Brewer says, one could "write five 1,500-word pieces on this defense." Seattle has three main defensive fronts that all of their other formations build off of: the Under front, the Over front, and the Bear front. Carroll and Bradley based out of the Under in year one, but have gradually gone to prefer the Over alignment. Each front has it's unique strengths and weaknesses in a vacuum - the Under is generally better against two-backfield sets, the Over is generally better against one-back sets, and the Bear front covers up the three interior offensive linemen, preventing pulling/trapping/second level blocks. 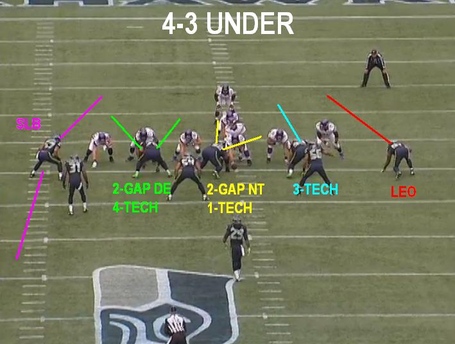 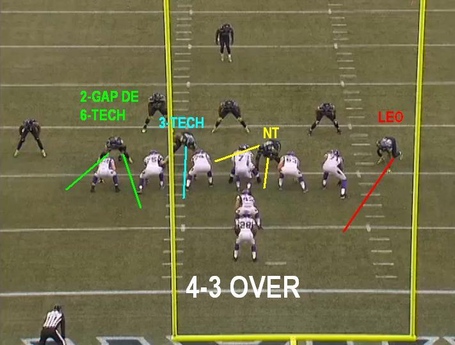 As you can see, the Leo (Chris Clemons for Seattle) aligns very, very wide. There's a huge natural bubble for the offense to try and attack. It's very inviting, but overall it's a huge trap and plays exactly into the defensive structure. By overloading one side with massive two-gappers and bringing a safety down into the box, the linebackers are freed up with clear run-throughs and support the bubble with no hesitation.The offense can try to run into a ball of massive bodies to the strong side, or they can attack the huge weakside bubble, where they'll be outnumbered. This is a big reason why Seattle runs so little Cover Two - they don't want the linebackers responsible for two gaps and hesitating while trying to read the flow. 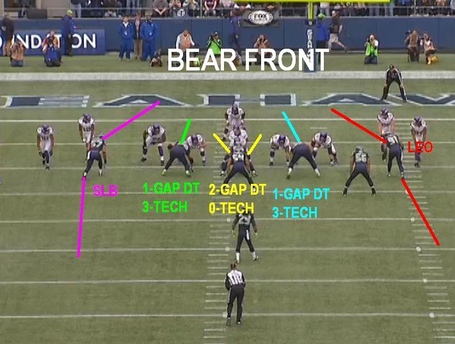 Lastly, there's the Bear or "Double Eagle" front, although Seattle uses it as more of a change-up. One of the Seahawks' favorite nickel packages is a variation of the Bear front, where they remove the two 3-technique DTs and swap the SLB with another Leo (usually Bruce Irvin).

There can be any number of variations on these three fronts, but these three remain the backbone of everything Seattle does on defense. Since the Seahawks go with so much beef up front, it's imperative that the Leo can consistently disruptive pass rusher on the edge. One of the most important questions for the Jaguars going forward is identifying as to whether they have anybody who can man the Leo spot.

Since the Leo plays from a looser alignment and operates in space, he doesn't need to have great size. Chris Clemons is listed at only 6'3 and 254 pounds. Bruce Irvin is an even smaller 6'3, 248. As the roster currently stands, the Jaguars have a trio of candidates in Andre Branch, John Chick, and Jason Babin. Of the three, Babin would likely have the inside track, as the Leo spot isn't much different in terms of responsibility from what Babin did as a "Wide-9" defensive end in the Eagles' defense. However, there's still much time left for players to be added to the roster and for roles to be decided.

Overall, it's a very exciting time to be a Jaguars fan and watch this defense grow over time into an elite unit, much like Seattle fans have gotten to enjoy over the last three years. I'm still in the process of learning as much as I can (as quickly as I can) about this defense. H/T to all the guys at Field Gulls. They've got an awesome Xs and Os Library that you should check out if you want to learn more about Bradley and the new defense.