One area that has become a big concern for the Jaguars is their special teams unit, despite the success of Bryan Anger.

I have been out of town for a week because my grandfather passed away the day after Christmas, and we took a trip up to Iowa to go to his services. I intended to do this last week when it was more topical, but obviously I was busy and kind of off the grid which is why Adam did a great job covering while I was gone.

Anyway, I figure this would be a great break from the general manager news search and look at something from the final game of the season. The Jaguars allowed two punt returns for touchdowns in the same game and a big reason for that was poor coverage by the units as well as Bryan Anger out kicking his coverage.

The first punt was near halftime that Darius Reynaud returned for 69 yards a score. As you can see in the image below, there is just one player within five yards of Reynaud when he fields the punt (CB Mike Harris) and he's being blocked cleanly by the Titans. The other player circled is rookie linebacker Brandon Marshall, who wides up running right at Reynaud and getting himself blocked out of the play. 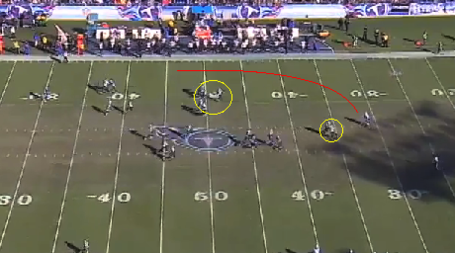 The coverage unit forces Reynaud to take the sideline as designed, but the Jaguars coverage unit simply just gets blocked out of the play. There's nothing special about what Reynaud does. He chooses a lane and just goes. The only player he needs to juke is punter Bryan Anger, and I'm not really going to get on the punter for not making an open field tackle. The gunner on that side, who I believe is Antwon Blake, also falls down as soon as he's jammed up by the Titans unit.

In the third quarter, the 58-yard return by Reynaud is just poor coverage, tackling, and contain by the Jaguars unit. Anger puts good hang time on the football and there are bodies around him as he fields the punt and he tries to take it to the right side, which causes the Jaguars coverage unit to commit hard on the right side. 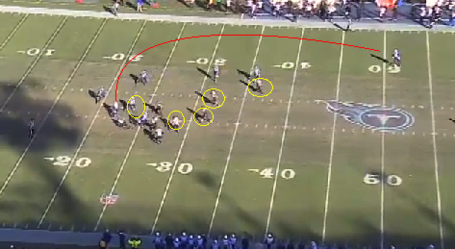 Reynaud brings the ball where the Jaguars want him to, but he stops and spins, causing Brandon Marshall to miss the tackle and allowing Reynaud to turn the ball back up field away from the rest of the Jaguars coverage unit. 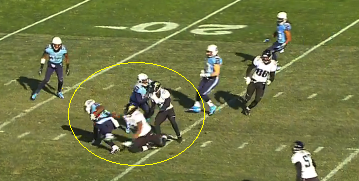 After that, it's just off to the races as Reynaud uses his speed to finish the play for the score as none of the Jaguars unit can pick up the angle on Reynaud.

I'm not sure how exactly the Jaguars can fix the issues that were on display against the Titans, but it was just a matter of time before a team picked up a huge return on the Jaguars punt unit. The team had released one of their gunners in wide receiver Kevin Elliott and had running back Montell Owens starting meaning he couldn't fill his role either.

The Jaguars punt coverage unit on the season allowed 12.4 yards per return, which was the sixth most in the league. They also finished the season allowing the most punt return yardage in the NFL. Obviously those stats were assisted by the two punts returned for touchdowns in the final game, but it was an issue that was just waiting to happen.