SUNDAY SUNDAY SUNDAAAAAAAY! THE JACKSONVILLE JAGUARS ROLL INTO DENVER FOR A FOUR QUARTER HANDICAP MATCH IN THE SQUARED-CIRCLE THAT IS MILE HIGH STADIUM!!!!!! OHHHHHHHHH YEAHHHHHHHHHHHHHH! SNAP INTO OUR PREVIEWWWWWWWWWWW!

Share All sharing options for: Jaguars vs. Broncos 2013: THE BCC PREVIEW EXTRAVAGANZA 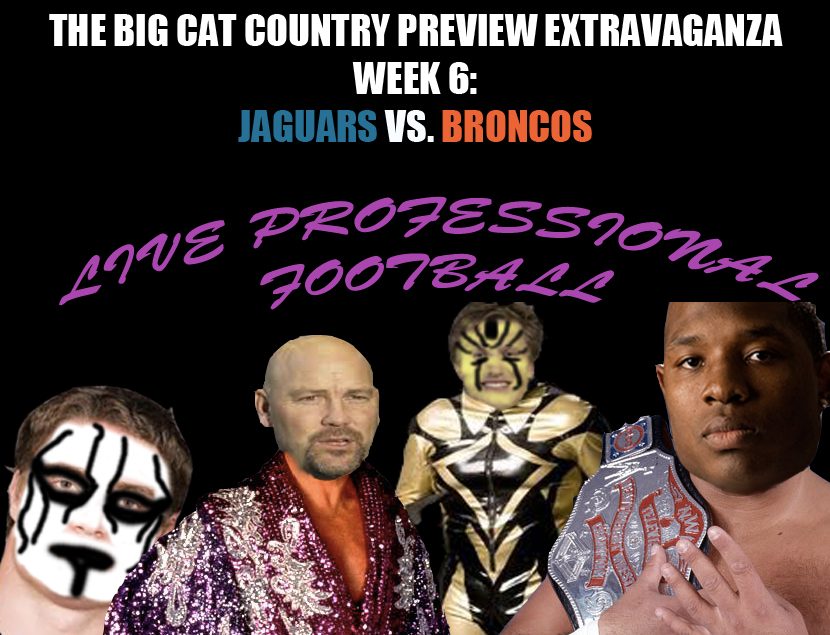 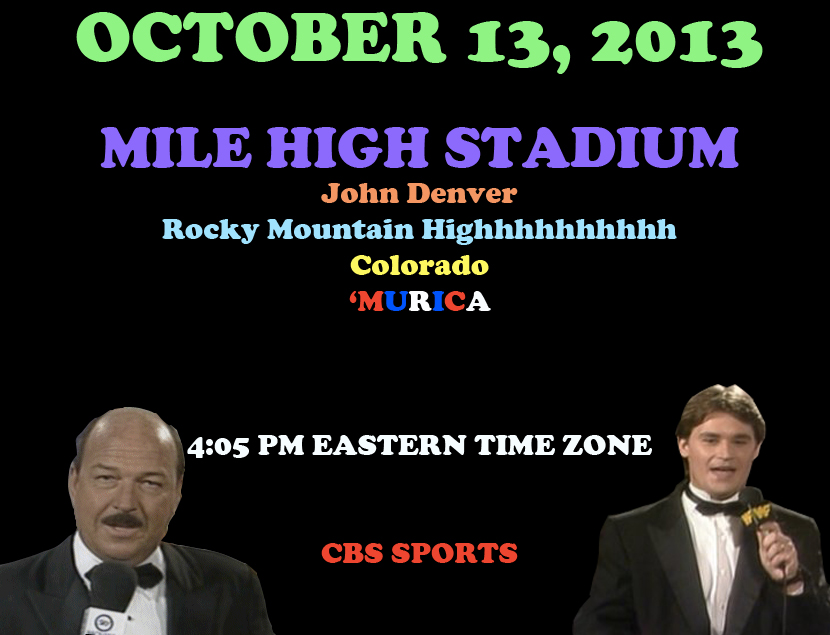 Chad and the Four Horseman, WOOO, MJD, Justin Blackmon-WOOOOOO and Cecil Shorts will prove HAHA that in order TO BE THE MAN WOOO YOU GOTTA BEAT THE MAN!

So 28 points HAHA oooh, I don't care what them non-dressin, non-women getting choir boys in Vegas say WOOOO, when Ric Flair and the Jaguars roll into town, there is no greater show on earth. So when you throw your slander WOOO at the alligator-Italian-shoe-wearin' quarterback, Chad Henne, HAHA, you know what, Mean Gene, you better bring your A-game.

If you don't, mark it down. Write it in the sky. We will leave Mile High and you'll be high and dry WOOO!

AND HERE'S THE BOTTOM LINE, IF YOU ARE A MAN, YOU DON'T CRY ABOUT IT! YOU GO IN THERE AND YOU PROVE WOOOOO WHY YOU WERE THE QUARTERBACK AT MICHIGAN. WOOOO YOU SHOW EM WHY YOU HAVE MS ELIZABETH! YOU SHOW EM WHY HA HA WHY YOU WEAR THE ROLEX AND DIAMOND RINGS! NOW DO ME A FAVOR AND CUE MY DAMN THEME MUSIC!

BATTLE ROYALE FOR THE INTERCONTENTIAL BELT

Audio transcript from the match

On the line: [see title]

TONY SHIAVONE: Clark and Twig immediately grasp each other, but the ref breaks it up immediately. Clark moves to his left, hits Twig with a right and takes him to the ground and puts Twig in an armbar but the Twig breaks free.

BOBBY "THE BRAIN" HEENAN: I've been told that Twig has a new maneuver that he's been working on for months. I sure hope he'll introduce it tonight./Several thuds on the mat

TS: OHHH Clark stomping Twig unmercifully on the ground. Clark pulls up Twig. Repels of the back ropes and OH WHAT A MANUEVER! CLARK BRINGS TWIG TO THE GROUND!!!

BH: Twig looks beat out there. I don't know if he can go on.

TS: Clark is climbing up on the top ropes. This could spell the end for Twig and HE FALLS. CLARK FALLS. CLARK IS DOWN. BOTH MEN ARE ON THE MAT. ARE YOU SERIOUS?!! THE REF IS COUNTING. 10 SECONDS TIL A DRAW.

BH: Both men are down, 6 seconds left. Whitney is screaming at the ref trying to get his attention.

TS: Wait a minute, Twig is getting up. Twig just got back on his feet. WE MIGHT HAVE A MATCH. What is this!? The Twig is whipping his left arm around in a circular motion. Could it be? YES! IT IS! OH MY IT'S THE WINDMILL. THE TWIG IS DOING THE WINDMILL. THEY SAY IT'S THE MOST LETHAL MOVE IN ALL OF WRESTLING. HIS ARM IS WHIPPING AROUND FASTER AND FASTER. OH NO! OH NO! HE CAN'T DO IT. HE WON'T DO IT.

TS: TWIG CHARGES AT HIM AND...OVERSHOOTS HIM BY A MILE AND NOW...FALLS HEAD OVER FEET OVER THE ROPE AND NOOOOOOOOOO!!!!!! HE LANDED ON WHITNEY. WHITNEY IS DOWN. OH MY GOD WHITNEY. IS. DOWN.

BH: I DON'T BELIEVE MY EYES!

TS: THE REF IS COUNTING DOWN TO DISQUALIFICATION. THE TWIG IS LAYING ON HIS SIDE WITH HIS ARM STILL SLOWLY ROTATING IN A CIRCULAR MOTION. WHITNEY ISN'T MOVING. THIS CAN'T BE THE WAY THIS ENDS.

BH: OH The fans aren't happy at all about this.

TS: This is pathetic. Clark wins the match by disqualification. Whitney is still down. This is shame on our sport. I don't believe this nonsense. We'll be back after these commercials on TBS.

When you're watching the match on Sunday keep an eye out of illegal objects pulled from under the turf. Don't be distracted by Peyton Manning's gyrations. It's just a trick so that Von Miller can secretly bribe the referee while Julius Thomas grabs a chair.

Losing isn't always a pretty situation. But people have to remember that jobbers are people too. They're an important part of the National Football Wrestling Association. The Jacksonville Brawler is a respected wrestler and should be held to the highest respect. So what if he doesn't win a match all year? He'll be reward when he introduces his new tag-team partner during the next season, Teddy "THE TRUTH" Bridgewater.

JACK DEL RIO, the Denver Defensive Coordinator. I don't have to say a lot more about the way I feel about Jack Del Rio! NO RESPECT! NO HONOR! There is no honor among losers in the first place! He put HARD TIMES on the Jacksonville Jaguars and their family! You don't know what hard times are, daddy! Hard times are when the Tebows around this country are outta work, and got four or five kids, and can't pay their wages, can't buy their food! HARD TIMES are when the pass rushers are outta work, and they tell 'em go home! And HARD TIMES are when Eugene Monroe is workin' a job four seasons! FOUR SEASONS! They trade him, kick him to Baltimore, and say, 'HEY A JOECKEL TOOK YO' PLACE, DADDY.' That's HARD TIMES!

2. marcedes lewis deserve the camel clutch. make him humble. he no good jabroni.

3. WHATCHA GONNA DO WHEN THE BRONCOS SCORE HALF A HUNDRED ON YOU, BROTHERRRRRR?

5. WHAT A MANEUVER BY PEYTON MANNING! 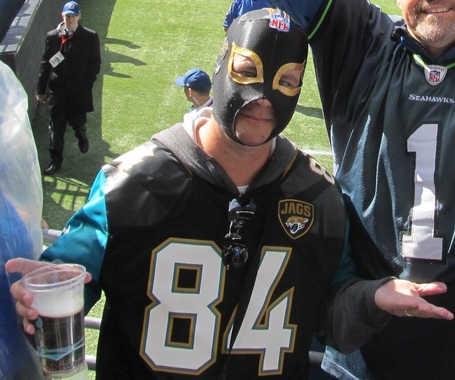