Jaguars fan in London: Setting the trip with no regrets

Jaguars fan Casey Ayers decided he was going to make the trip to London this year and take in the experience, but even as he's set to jet across the ocean, he doesn't regret going with the current shape of the team.

Share All sharing options for: Jaguars fan in London: Setting the trip with no regrets

Eight years is a long time. I thought I’d have been back to London before now, at latest for the Olympics in 2012. At least, that was the plan, dating all the way back to a school research trip to the UK in 2005. The obscenely high pricing of official packages meant the Olympics would have been financially ruinous, so I shelved that goal well before the Games took place.

The Jaguars announced their four year deal to play one game a season in London shortly after the London Olympics concluded, and with the news came a new goal: travel to at least the first, and hopefully all four, of these "home" games. Once again, the official packages came with outrageous pricing, but I committed to finding a better way. I learned the ins and outs of frequent flyer programs and a few months later, booked four $97 roundtrip tickets for my family to London and free nights at Joe Biden’s favorite London hotel. At last, it’s time to step on the plane.

Some people have asked if I regret going this year, to see this 0-7 team play. Wouldn’t it be better to have kept the powder dry and shoot for next year or the year after? I couldn’t be happier to be going, right now, for the same reason people go to midnight movies or line up before dawn for a new iPhone: first is special. 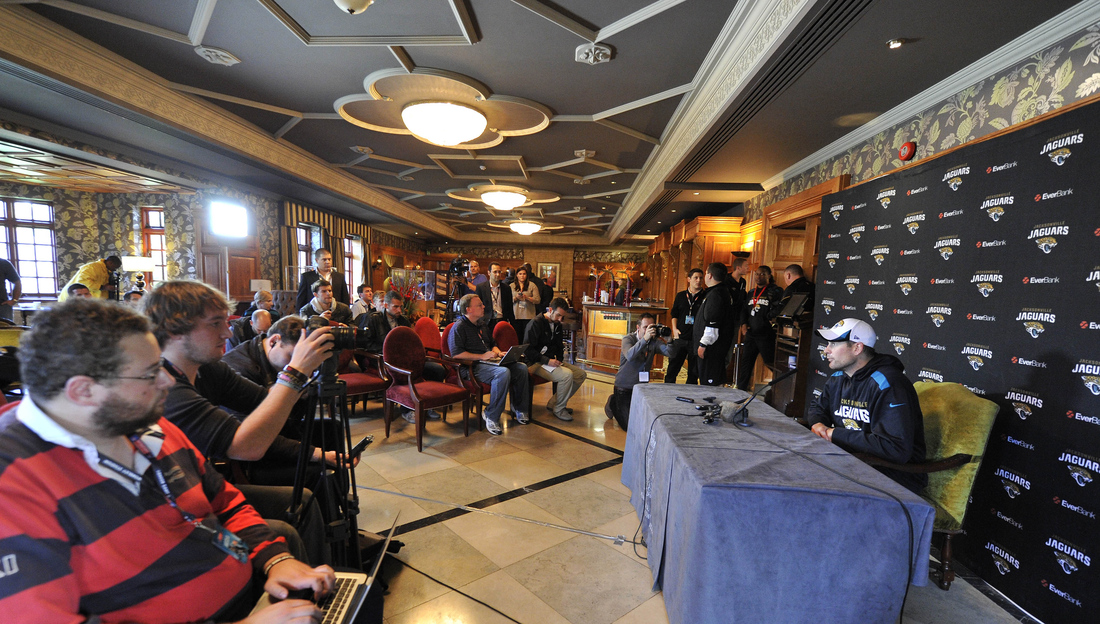 The Jaguars may be calling London 'home' for one week a year for the next four seasons - but on Wednesday, the players explained how despite playing across the pond, it's just another road game to them.

The record doesn't matter. This is the first of perhaps only four home games the Jaguars will ever play outside of Jacksonville. It's a chance to see our team on a global stage despite their record. It's as close to breathing the rarified air of February football as we'll get for the foreseeable future.

When it comes to small market teams, few would doubt the Green Bay Packers are the gold standard. Lambeau Field has more than 80,000 seats now. Good luck getting ahold of one anytime soon. Even so, the Packers played games in Milwaukee from 1933 until 1994 in order to grow the team’s visibility and find the revenue needed to sustain the team. Their stadium is named after the very man who tried unsuccessfully to move the Packers to Los Angeles early on! The secret to their success in a media market smaller than Wichita is simply time and victory.

Consider Shad Khan's position, sitting at the bottom of the barrel for team revenue in the NFL. He asked the League for permission to expand the team's marketing efforts in Orlando and was met with a resounding no. The Buccaneers, all too familiar with revenue issues, closely guarded their rights to the market. Whether it would have made much difference had the Jaguars been granted access to Orlando is up to question, anyway. The Orlando market - and especially its dumpster fire of alleged journalists - are adamantly, steadfastly opposed to the Jaguars, siding with the more distant Dolphins at every possible opportunity.

Having lived in Jacksonville and Orlando, my experience has taught me that there's a deep-seated jealousy and disdain for Jacksonville held by many (but not all) in Orlando. There's a sense that Orlando deserves to be treated with respect by the NFL, and that lowly Jacksonville - not Tampa or Miami - is the undeserving city that will forever stand in the way.

With Orlando essentially a dead zone for the team officially, that left few options for the Jaguars to expand their revenue base, especially when fielding an uncompetitive team in a stadium not yet replete with revenue-generating upgrades. With nothing but trees and Tallahassee to the west, Daytona to the south and a bit of possibility up the Georgia coastline, it's no wonder the Jaguars leapt at the chance to step into the London market when the Rams reneged on their agreement.

The Jaguars were shrewd in structuring their four year deal with the NFL. Landing exclusive marketing rights to an entire country, ripe for the development of new fans, merchandise sales and - most critically - corporate sponsorships, can go immeasurably farther than a few TV commercials and shuttle service to Orlando ever could.

These London games make unique business sense for the team now, as the Jaguars work to develop new premium options and corporate partnerships at home, and as they build a roster from the ground up. That's also why I don't think they'll last forever. They can take the money of tens of thousands of people who have almost no awareness of the team's performance now while they develop a sustainable product at home.

While the games may go past the initial four year commitment, I'm not so sure. That makes them unique, and the League's interest in London places the full promotional weight of pro football behind these games, elevating them far beyond the games the Packers played in Milwaukee or the games the Bills still play in Toronto.

Whether the first of four or the first of more, this game remains the first. And so here I stand in line, not at the movie theater or the Apple Store, but at a boarding gate, ready to see my first away game, in a different home.