"We want to create an identity, a bold ambitious franchise that is aggressive, forward thinking on the field and away from the field."

These were the words of Jaguars owner Shad Khan in August of 2012, when the team's four year commitment to play an annual game at Wembley Stadium in London was first announced. 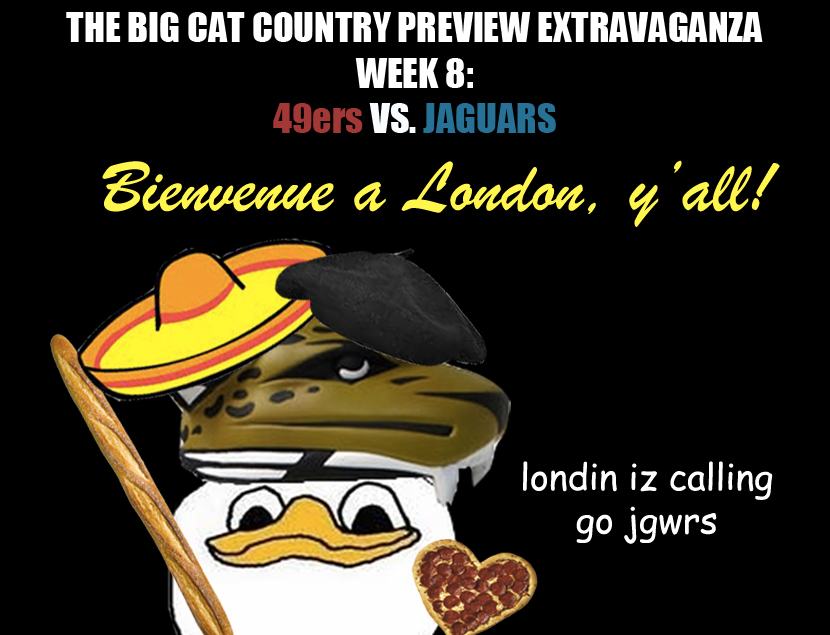 This is one of the world's greatest cities - perhaps its greatest - and throughout it there is genuine excitement for the novelty of professional American Football. I wondered if the preceding game played by the Steelers and Vikings might have dimmed London's enthusiasm for the NFL and the Jaguars, but if anything, it merely whet their appetite.

Throughout the past few days, I've heard more "Go Jags!" calls in this city than I've heard in Duval in years. Noting the mix of "Jagwars" and "Jag-you-ares" has been an entertaining task, dividing the traveling fans from the locals. There are more of the latter than you may have suspected.

Today at the Tower of London, we stepped into the anteroom of the building where the Crown Jewels are held, a few steps from a vault door made of 10-inch metal that protects the priceless artifacts of an empire. When the room's attendant first approached us, I thought perhaps we'd done something wrong: someone had pulled out a camera or phone, stepped past a barrier or committed some other ill. She asked my mother, "Do you know what you have on your back?" Now I figured some monstrous spider or a "Kick Me" sign had found its way onto her, but all I saw was a Jaguars logo.

The attendant suddenly smiled and began to gush: "They were HERE last night! They saw the jewels and had dinner! I helped set up for it. I felt embarrassed; I didn't know any names, really, but there were a hundred and so of them, so I'm not sure I'd have been able to pick out any faces anyhow. I don't know much about American Football, but it was exciting. Did you know they play here this weekend?" 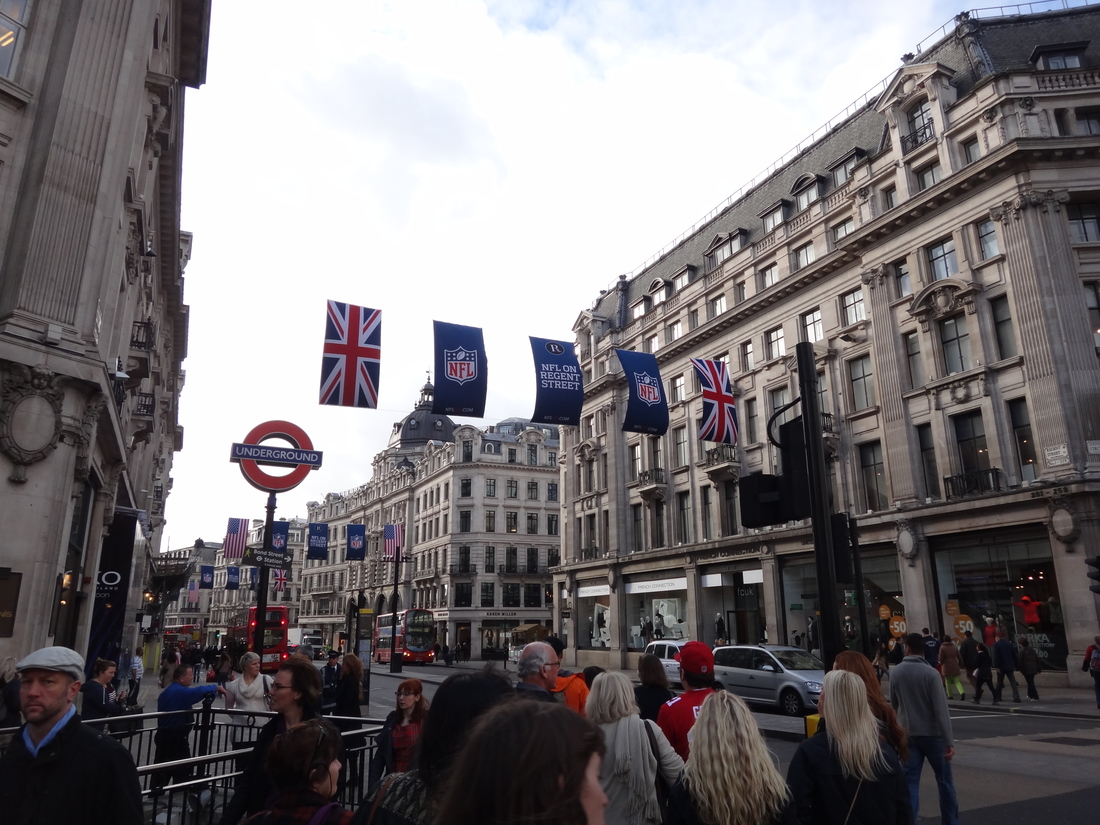 We assured her we knew.

Coming across Regent Street, the banners placed across the road every hundred paces announced what was already clear: this is a big, big deal for the NFL. This is much more important than a Pro Bowl, and perhaps only slightly less important than the Super Bowl itself.

Turning to Niketown, I was startled to see two Paul Posluznys in full gear welcoming visitors at the entrance. One threw a ball my way. I dropped it. I'll blame his odd passing technique, even though I'm doubtless the one actually at fault. 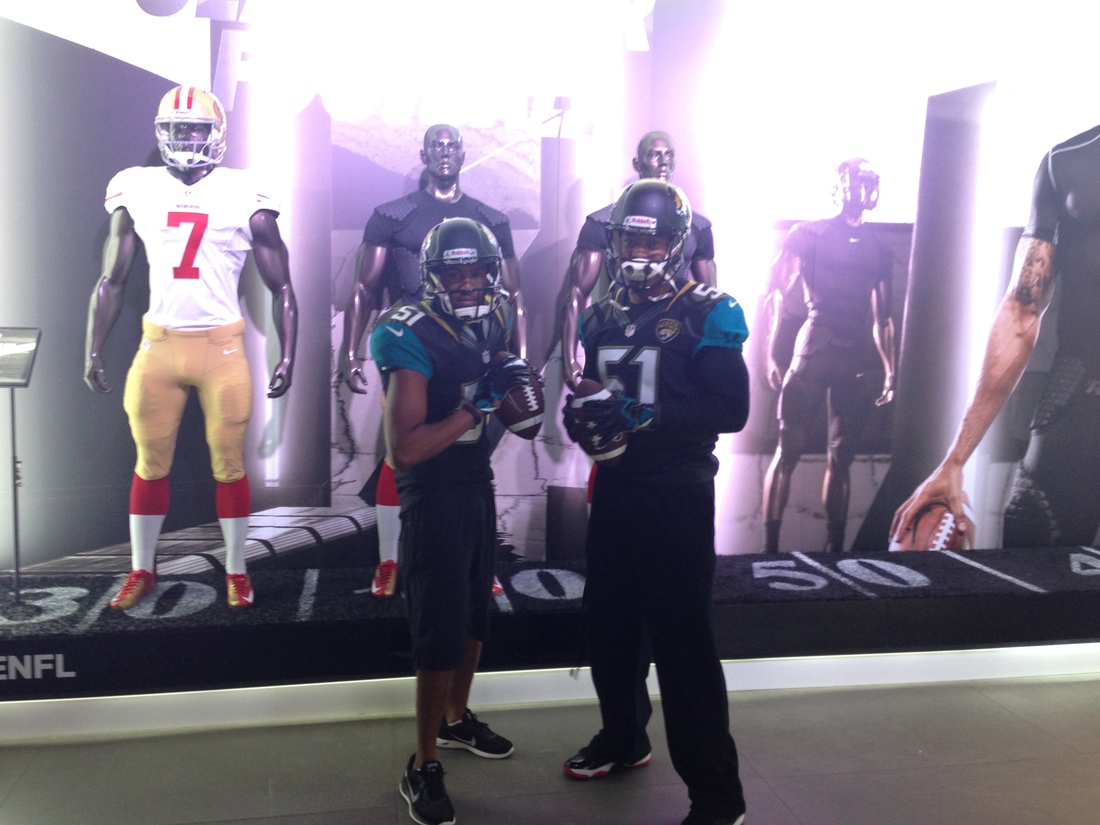 The first floor of this four story shrine to the goddess of shoes and swooshes was, in effect, the most magnificent Jaguars team store I had ever set foot in. With the exception of a small rack of 49ers goods in the back, essentially the entire floor was filled with nothing but Jaguars uniforms worn by imposing mannequins, stacks of Jaguars t-shirts, racks of Jaguars jerseys, examples of customized Nike iD Jaguars shoes, Jaguars helmets, Jaguars gloves and every other type of regalia imaginable aside from hats and shields. This continued on the second floor, where a display of children's products showed kid-sized mannequins wearing Jaguars shirts with their backpacks, and on the third, where the store's typical NFL space was heavily biased toward the Jaguars, with a Cecil Shorts mannequin evading a 49ers defender making clear the area's purpose.

Down the street, a flashmob pep rally, apparently instrumented by Union Jax members, did their best impersonation of cheerleading with pom-poms and high fives. Spotting our Jaguars apparel, they roared with approval.

These displays of enthusiasm are at once heartwarming and hilarious. A well-versed American fan can immediately tell that most of these folks have only the slightest grasp on the sport and its aesthetics. One of the Posluznys at Niketown asked me, with great seriousness, if I was a player or on the coaching staff. I happened to be wearing the same team logo jacket players have been wearing throughout the week, including during their recent appearance at the store. They don't sell this particular jacket here, which is a devastating loss for the locals. The flashmob pep rally was vaguely reminiscent of the abomination featuring Regis Philbin that recently aired on Fox Sports 1, but without the barest trace of sarcasm or mean spirit. Their hearts are in the right place, even if they're not yet terribly aware of the particulars. 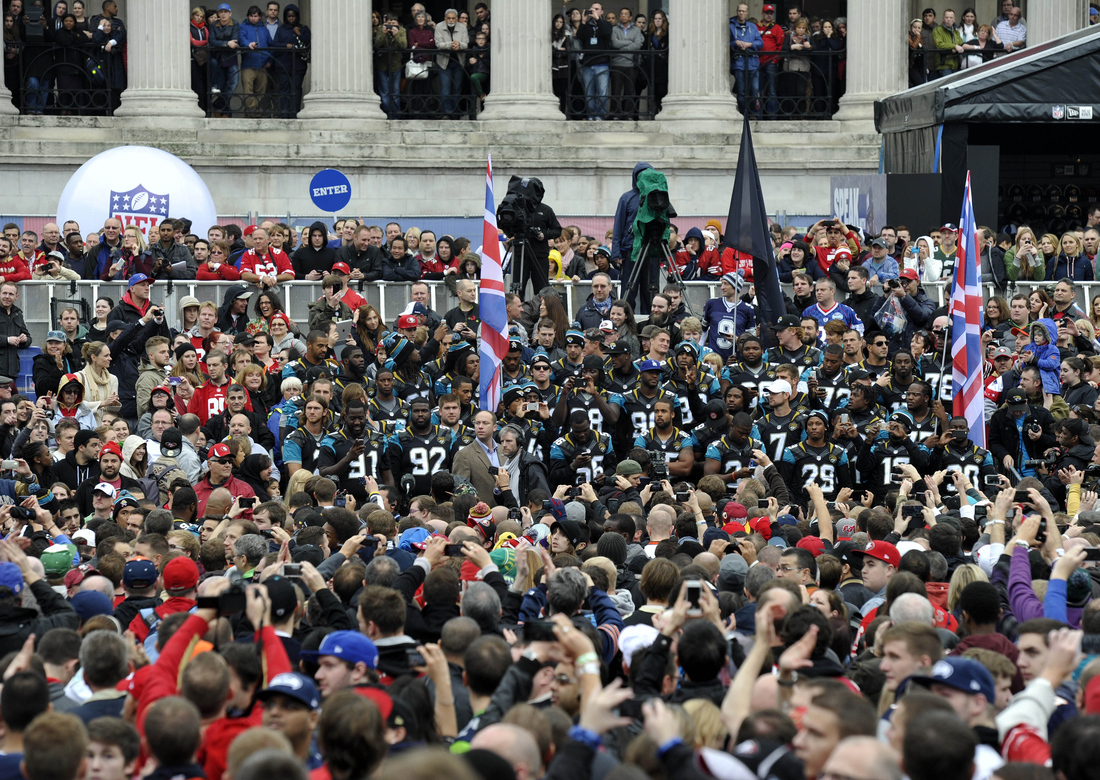 Perhaps that's exactly why this is working so well.

In America, the Jaguars are, well...you know what's said about our team, without ceasing, by those who know well and those who don't at all. All the belief in the new direction of this franchise doesn't stop 0-7 from being the present reality. No one would argue this is a strong roster or a team standing much of a chance against most teams on their schedule, not least the 49ers.

None of that matters here. Any awareness of the present strength of the Jaguars roster is completely vacant from budding fans taking their first steps toward understanding this great sport. How many of you know the record of Shad Khan's other team, the English Premier League's Fulham Football Club? How many can name a favorite player, or second, or third, or fourth? If you're coming up short on answers, you'll understand the perspective of Jaguars fans in London.

This is not just an area ripe for expansion; it's a nation largely untarnished by any conventional wisdom of good and bad, absent of the fandom dictates of professional football often passed from one generation to the next in America. It is the New World, in the Old.

Tens of thousands came to a fan rally in Trafalgar Square today. The Jaguars received the kind of welcome and admiration that is unheard of at home from a crowd simply happy they were there. I saw a British family, with four children. The whole family was dressed in Jaguars merchandise, from head to toe, the youngest daughter as a Jaguars cheerleader. 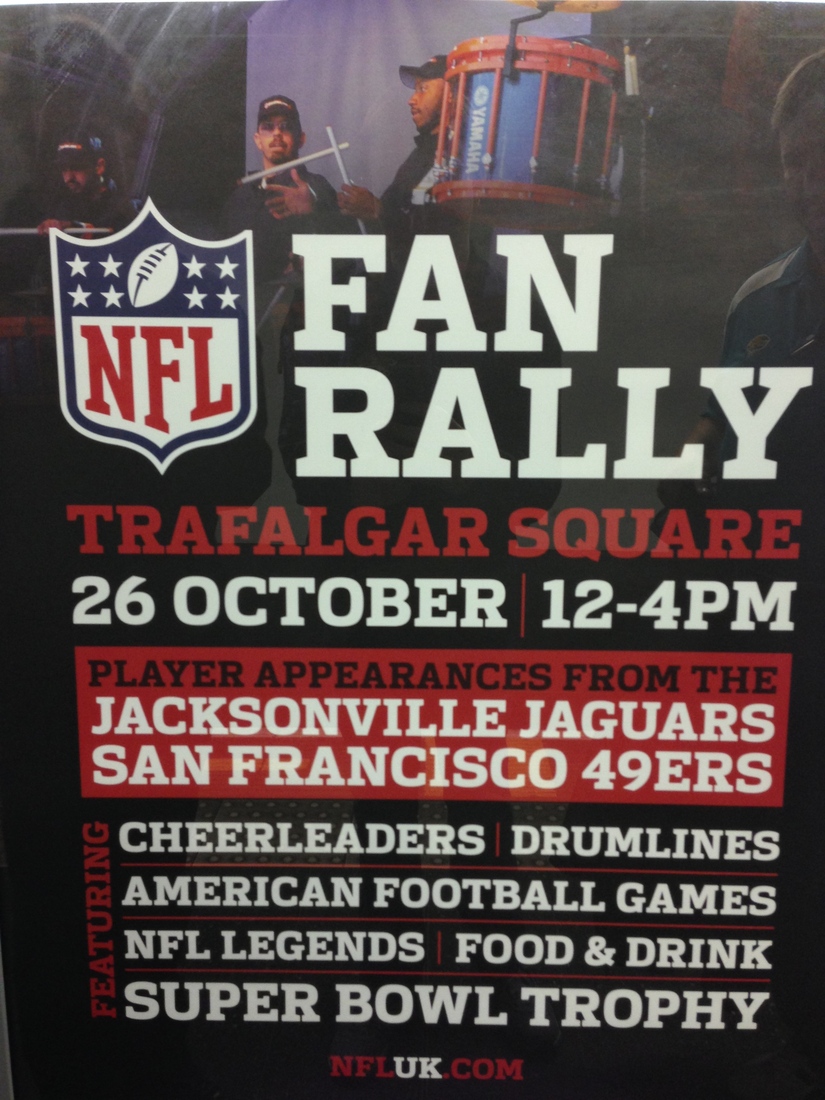 This was the moment when the reality of this event in Jaguars history hit me: Shad Khan is not building a higher-profile or moderately more successful NFL team. Shad Khan is building Manchester United. He's building the New York Yankees. He's building a global icon that stands on its own accord as a brand, through good times and bad. He's laying the foundation for what will be one of the most successful franchises in professional sport in ten years.

One might have cause to worry about the Jaguars' viability in Jacksonville given this level of ambition, but after a great deal of thought, I don't let it worry me. I know what Jacksonville's fans have been through for more than a decade and certainly for the past five years. This is a fan base all too aware of failure, all too aware of the win-loss record, all too aware of poor personnel decisions and certainly all too aware of the never-ending barrage of hot takes from every ex-athlete and every wish-they-could-have-been-an-athlete in the American sports media. I know how this fanbase has grown and become more resilient as the younger generation of fans has taken the team as its own. And because of that, I know what will happen when we win.

Jacksonville is the name that precedes Jaguars on every single poster and handout here in London, and that will not change. Exposure in London simply adds rocket fuel to the new engine Shad Khan is building. The Jaguars have found a way to enjoy the benefits of exposure in a world capital without the burdens that typically come with it. If an 0-7 team is capable of this much positivity, I can't imagine what a 7-0 team playing here would accomplish, coupled with a home fan base in Jacksonville that would be unable to contain itself.

But I'm pretty sure Shad Khan can.