Jaguars vs. Rams: Behind enemy lines

As the Jacksonville Jaguars get ready to take on the St. Louis Rams, we catch up with Turf Show Times to get the lowdown on the Rams.

Share All sharing options for: Jaguars vs. Rams: Behind enemy lines

One player on offense the Jaguars need to watch out for?

What looked like a unit that had the makings to really improve after a subpar 2012 season, the Rams' offense just looks confused right now. The Jared Cook GIF is a microcosm for everything wrong on that side of the ball. The play is sloppy, the coaching's been pretty awful and in spite of improved individual talents, the lack of cohesion has Rams fans behind a poor product at the quarterpole. So while the easy pick for an offensive player to watch out for would be Tavon Austin, I'll go with Chris Givens. Givens quietly had a plus rookie season, and has continued to add to his deep game with some cleaner intermediate work. 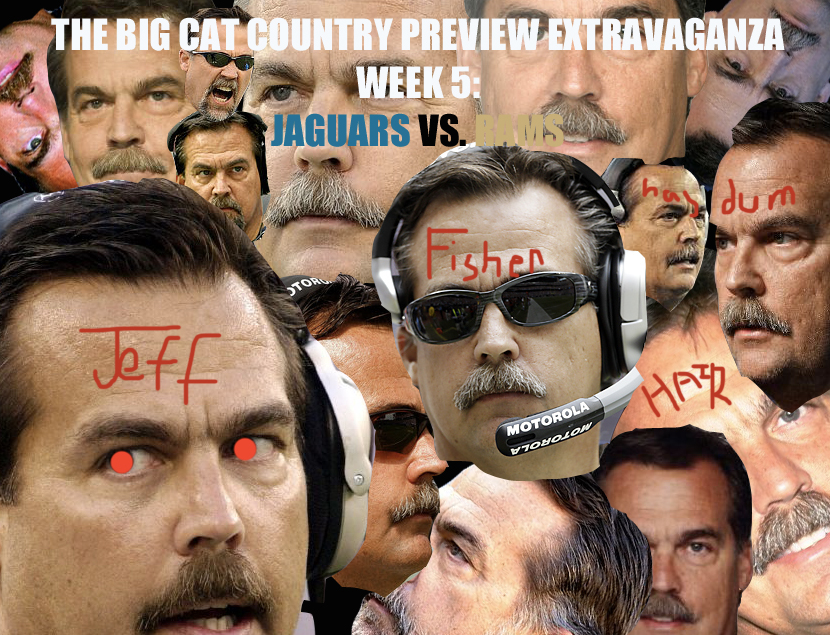 The Jacksonville Jaguars are going west to take on the St. Louis Rams. I thought France didn't have an NFL team. Big Cat Country has everything you need to know about the game whatever... /handwank

One player on defense the Jaguars need to watch out for?

For the Rams, the defense starts up front. All four defensive linemen are capable of positive plays, though they've had some weird assignments at times that has a lot of fans concerned (and that's being nice) about first-year DC Tim Walton. Still, if there's a player to keep an eye on, it's Robert Quinn. He's capable of a positive splash play on every passing down, and he's improved against the run. He's already at five sacks, so he could have the top-tier season Rams fans know he's capable of.

What's the deal on Sam Bradford? Is this a make or break year?

Sam's mental game is just way off right now. He's got the accuracy to make any throw across the field, but nothing's clicking. Tavon Austin isn't being sent into space well, Givens isn't getting deep reads enough to find him when he's open, teams have clamped down on TE Jared Cook and it's limiting him largely to relying on Austin Pettis. No team wants to be in a position where their passing offense is "largely relying on Austin Pettis." I argued that this is a MOBY, but even among the TST staff we're divided. I'd guess that his poor play thus far has a lot of people who were in the latter camp rethinking their positions though.

How has Tavon Austin been so far?

Lightning-y, but very in a bottle-y. The playcalling and the performance of his teammates has been subpar to say the least. But he's a natural talent. He's silly quick and he has a final gear, so it's just a matter of getting him in position to take off. The Rams have absolutely failed at that thus far, and that's just not Tavon's fault.

Whats your prediction for the game?

Ugh. I'm worried about the Rams. They've been so completely bad the last two weeks in all facets that I'm not sure what to think. The Rams are being outscored in the first half 16-65, and ten of those were in the season opener. For the mathematically challenged among you, that's six first half points in their last three games. It's just gross how they've started games this year. And I use that word purposefully. It's disgusting. So who knows. Maybe we come out and get a couple bounces and take advantage of some mistakes from your side. But I'm not counting out the possibility of this team continuing the form they've shown the last two weeks.