I went back through and tried to watch the game again, with coaches film, but I ended up shutting it off after the first quarter.

When I sat down to re-watch the Jacksonville Jaguars loss to the St. Louis Rams, with the All-22 coaches film, I expected to come away feel a little bit better about the game overall. In reality, I came away more frustrated than in the first watch because there were plenty of plays left on the field in just the first quarter alone.

It got so frustrating I turned the game off after the first quarter.

On the third play of the game, the Jaguars could have easily picked up a first down and continued their drive, but quarterback Blaine Gabbert double-clutched his throw and wound up losing his grip and just spiking the ball in the dirt. 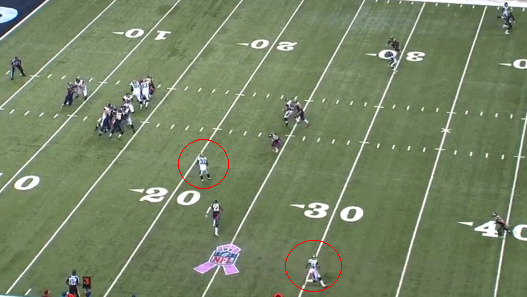 As you can see he has Justin Blackmon wide open beyond the first down marker and Maurice Jones-Drew, who he appeared to try to be throwing to, for a possible first down if he catches it cleanly and turns up field. The result however is an incomplete pass, nearly a fumble, and punting it away.

On the Jaguars next drive, after Ace Sanders punt return was called back for a bogus block in the back penalty, the Jaguars had an explosive play for a touchdown. They have the Rams defense to thank however, who just flat out blew the coverage on Blackmon. 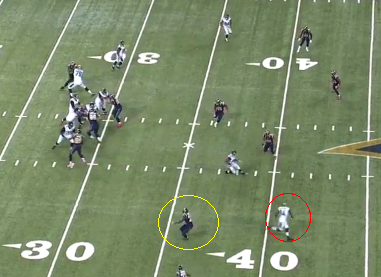 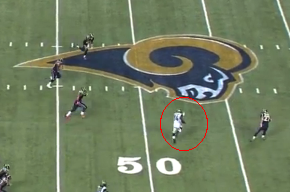 You should not allow a wide receiver to be that open down the field. The second picture as after Blackmon catches the football and turns upfield.

Next we take a look at the defense early in the game, who struggled to stop the run. This typically happens when a team doesn't play with discipline and misses their run fits. This six-yard run by Zac Stacy is a perfect example of missing fits and leaving a gaping cutback lane for the back to get through. 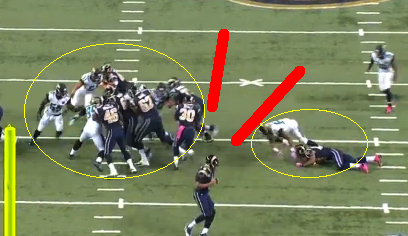 As you can see, all three linebackers are sucked in and blocked on the left while Jason Babin is cut from the right, opening up the backside cutback lane. Thankfully, rookie safety Josh Evans is there to limit the damage.

I'd be remiss if I didn't mention a poor play by guard Will Rackley in the first quarter, as on this Maurice Jones-Drew run he ended up not blocking a single player. 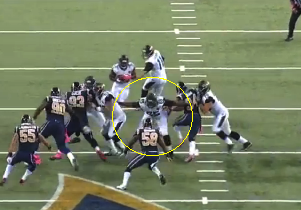 From this still, it looks like Rackley is going to pick up No. 58 and block him out of the play, but just a second later Rackley decides to turn and assist Brad Meester with his block and lets the backer run free to help assist with the tackle on the play. I'm not sure what it is with Will Rackley, but he's struggling with the zone blocking and often looks confused as to who he's supposed to pick up and who he's supposed to help.

On another poor play by the offense, where yards were left on the field and stalled out a drive, Gabbert bails from the pocket much earlier than he needed to. Not only that, but instead of opting for the checkdown and easily picking up a first down, he opts for the much harder throw down the sideline while on the run and makes a poor throw. 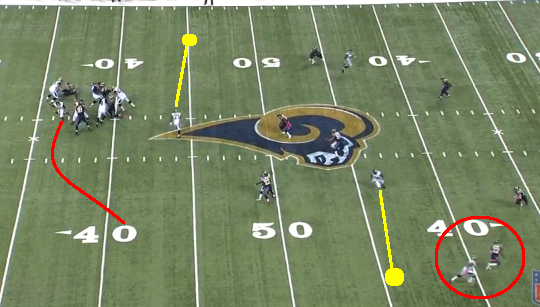 While the throw to Justin Forsett would be a difficult cross-body throw, there's plenty of open space for him to set his feet and loft the ball to him with plenty of green to run. The biggest gaffe however is not hitting Justin Blackmon who's running to the sideline and all by himself beyond the first down marker. If you think this shot looks bad, here's a shot from a few seconds later where Gabbert still hasn't thrown the football.

The next play we're looking at is the one where I decided I was done watching and just turned the game off. It's Gabbert's first interception, which was more like a punt than a pass. 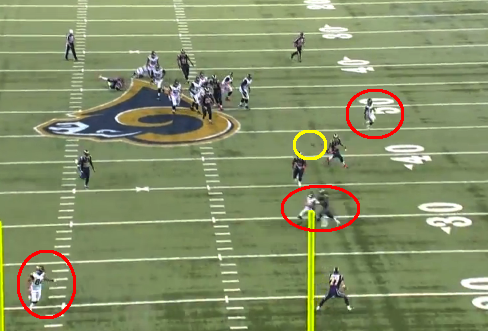 The yellow circle is the ball in the air, the red circles are the Jaguars receivers. The only thing I can think of on this play is that Gabbert thought Blackmon was running a 9-route (go) instead of the deep post. Even if that's the case, he's still throwing it into double-coverage because the safety is waiting right over the top of Blackmon.

You can see in the animated .gif below that he missed Shorts wide open down the seam for a likely touchdown.